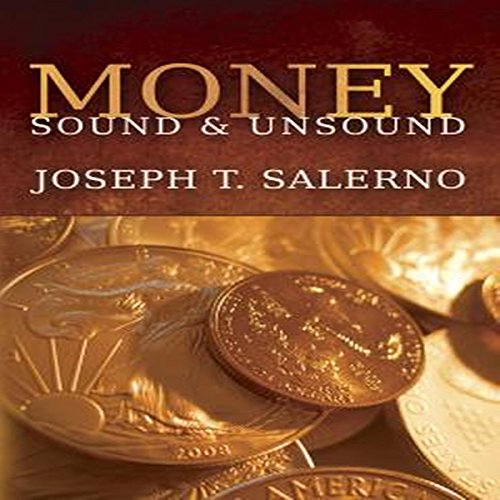 Ludwig von Mises said there can never be too much of a good theory. Salerno proves it in this sweeping and nearly comprehensive audiobook on applied Austrian monetary theory. He uses the Mises/Rothbard theory of money to reinterpret historical episodes, reevaluate the history of thought, closely examine the Federal Reserve policy, seek out cause and effect in business cycles, provide a new understanding of war and social unrest, and clarify the relationship between the state and the central bank.

But it's not just about the past. He presents a great model for the future, too, with essays on how to tell real from fake gold standards, how to calculate the money supply and follow what the Fed is up to, and how to reform the international monetary system to keep money from the destructive hands of the state.

This book might be considered an intermediate text on the topic. If you've experienced Menger, Rothbard, Mises, or Hayek takes on the topic of money and you want to know what's next, this is your answer.

Joseph Salerno is the master of the subject, the quality of money, which is too rarely raised and demonstrates absolute virtuosity in this listen. As he makes clear, money is either absolutely sound (meaning, part of the market order) or it is headed on that slide toward destruction. In the final commentary section, Salerno directly addresses modern monetary madness and speculates on the future.

This listen covers nearly 30 years of important contributions by Salerno.

This book is a thorough defense of Austrian economics, but so thorough that it is not for a beginner. Many of the chapters were written with an academic audience so some terms, such as arbitrage are used without being defined. I would recommend the hard copy of the book, but the combination of the very monotone narration, coupled with inability to highlight and return to parts not immediately understood made it difficult to get lasting value as an audiobook.