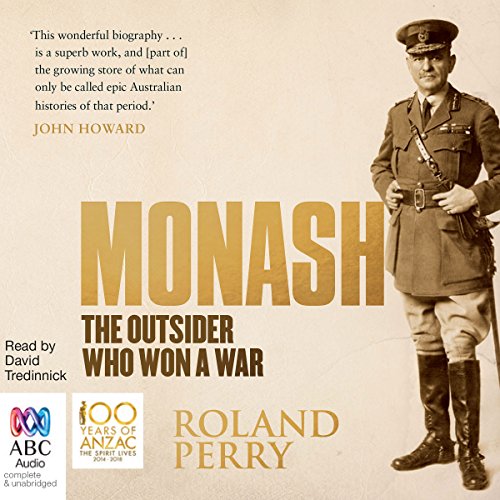 By: Roland Perry
Narrated by: David Tredinnick
Try for £0.00

Australian General Sir John Monash changed the way wars were fought and won. When the British and German High Commands of the First World War failed to gain ascendancy after four years of unprecedented human slaughter, Monash used innovative techniques and modern technology to plan and win a succession of major battles that led to the end of the Great War.

But Australia's greatest military commander fought as many battles with those on his side as he did with his enemies. Monash was the classic outsider who rose to greatness despite the mighty odd of his 'handicaps of birth' – having a German-Jewish background at a time when racism and prejudice were rife: and being a part-time colonial soldier in an Imperial British army.

Roland Perry brings to life the fascinating story of the man whom many have judged as the greatest ever Australian. Monash draws on the subject's comprehensive letter and diary archive – one of the largest in Australia's history. The result is a riveting portrait that weaves together the many strands of his life as a family man, student, engineer, businessman, lawyer, teacher, soldier, leader, romantic and lover of the arts; and reveals why, in addition to his amazing military successes, Monash is remembered and respected even more for his humanity.

"Compelling and wholly absorbing ... among the most remarkable Australians of his time." (Bob Carr)
"Highly readable ... inspiring." ( The Herald Sun)

What listeners say about Monash

What an amazing Australian!

This audiobook went beyond what I thought was going to a book on the 'war general' and delved into the passions and interests of Monash prior, during & after the war. I got to experience the 'human' side to what has been, in so many history books, a rather two dimensional figure.
I found the ongoing machinations of Hughes, Murdoch & C.E.W. Bean elucidating - finally putting paid to why Monash was not heralded as a hero general by the latter in his works. If you want an example of How sheer brilliance, force of character & integrity can win out despite the odds, then I highly recommend this audiobook.

If you could sum up Monash in three words, what would they be?

What was one of the most memorable moments of Monash?

the war statistic,s against the germans in that main battle

What does David Tredinnick bring to the story that you wouldn’t experience if you just read the book?

david seem,s to bring out the character in the storyline he is a very good and interresting reader

mandatory reading for the centenary of Gallipoli

Meticulius research by Perry make his ascertions compelling. Story with a great reading performance was extraordinary

Must read history for every Australian.

Very well written, ery well read and such an amazing story. Every Australian needs to learn about the amazing Sir John Monash.

History everyone should know

I regret I had not read this book when it was first published. Fascinating and important history.

There is no question John Monash was a brilliant commander. Thanks to him, the Allies experienced much success in 1917-1918. He braved Gallipoli as well. And he brought the incredible Aussies to the forefront, giving them the notoriety they deserved. His leadership brought the Australian corp to the forefront and changed the course of the war. Without Monash, the Allies might not have turned the tide, most specifically the Australians. Many details of his life were sordid and messy, especially his personal life. And many of the details one could do without. They drag on and on, and lead little to the overall story. But in terms of his generalship, John Monash was one of a kind. David Tredinnick's narration is spectacular.