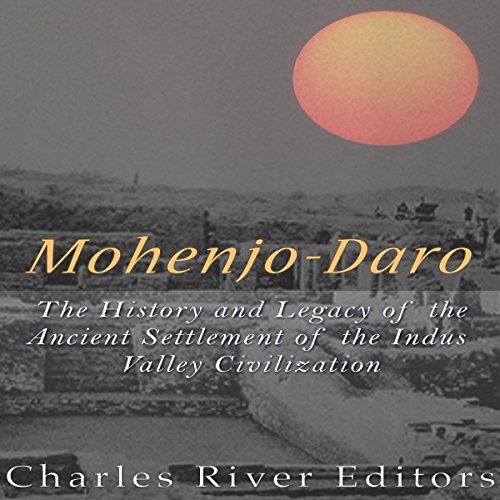 The History and Legacy of the Ancient Settlement of the Indus Valley Civilization
By: Charles River Editors
Narrated by: Scott Clem
Length: 1 hr and 7 mins
Categories: History, Ancient
2 out of 5 stars 2.0 (1 rating)

What is a city? A simple definition is a "largely constructed landscape", and through inferences and comparisons with modern states, a successful ancient city is generally said to have a number of defining characteristics: evidence of political hierarchies; a centralized authority that is simultaneously dependent on the accumulation of resources and the suppression of competitors; the maintenance of continuous negotiation, alliance building, and occasionally costly and risky investments such as warfare; specialized crafts; a hinterland supplying food; and monumental statements of central planning and communal effort, such as the Mesopotamian ziggurats.

Mohenjo-daro was the largest city of the Indus Valley civilization, one of the most advanced civilizations ever to have existed, and the best-known and most ancient prehistoric urban site on the Indian subcontinent. It was a metropolis of great cultural, economic, and political importance that dates from the beginning of the 3rd millennium BCE. Although it primarily flourished between approximately 2500 and 1500 BCE, the city had longer-lasting influences on the urbanization of the Indian subcontinent for centuries after its abandonment. It is believed to have been one of two capital cities of the Indus Civilization, its twin being Harappa located further north in Punjab, Pakistan.

Mohenjo-daro is an enigmatic settlement, which confuses simple definitions of what a city consists of. It has revealed little evidence of palaces, contains few definite religious buildings, and appears to have never been involved in any external or internal military conflict. The inhabitants' writing has not been deciphered, and little is known about their religious and post-mortuary beliefs. Nonetheless, the city's importance is epitomized by its monumental buildings and walls, enormous manmade platforms, innovative architectural techniques, and evidence that they engaged in trade over vast distances, with high-quality artifacts sent from the Indus Valley as far as Mesopotamia and even Africa. Of particular note was their ingenious drainage system – one of the earliest means by which sewage was drained out of the city. No other urban site of similar size had a hydraulic network as complex and effective as that of Mohenjo-daro, and it would only be surpassed thousands of years later by the network of aqueducts in Rome during the third century CE.

For centuries this city was believed to have sprung into existence suddenly and without precedent, with a highly standardized system of urban development, art, and architecture that is emulated in contemporary settlements across the Indus River Valley in a phenomenon known as the "Pan-Indus system". Although this view has changed over the last few decades, there exists no definitive hypothesis as to how they grew such a complex urban society so quickly. Fittingly, the city has an equally intriguing and mysterious narrative that explains its decline and eventual disappearance, a tale that gives the site its name: the "Hill of the Dead".

The Indus Valley Civilization was forgotten for millennia, until 20th century archaeologists rediscovered and began excavations at Mohenjo-daro and Harappa. Today only foundations remain, but the site's importance is represented by its UNESCO World Heritage status, awarded in 1980 for being a site of outstanding cultural importance to the common heritage of humanity.

One of the most fascinating mysteries in human history is rendered banal by this book. The situation is not helped by the narrator, who sounds robotic and mispronounces many words. Still, I stayed with it for the sake of the information it conveys. And it is mercifully short.

I stopped listening to this book after a few minutes because I felt as if I was being assaulted with information. The book is far too much like a text book, but what really ruined it for me was the narration. It was simply too fast. It was as if the narrator was trying to go through the text as quickly as possible. I think this narrator is capable of being excellent, but the speed was far too fast paced.

While it is not the longest audio book out there it covers a vast amount of knowledge with facts that give you an unbiased history of one of the greatest civilizations in the Indus Valley. the speaker also had a pleasant voice to listen to as well.