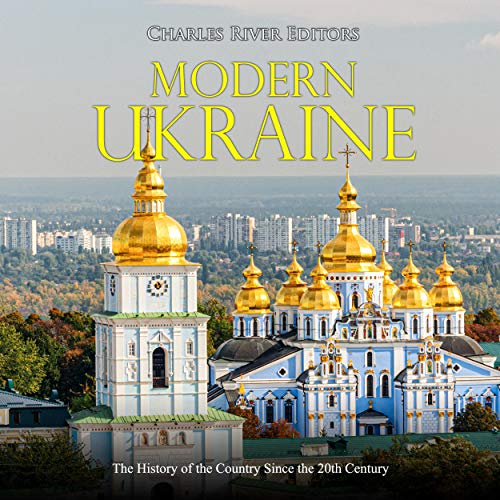 By: Charles River Editors
Narrated by: David Pickering
Try for £0.00

"Had I just 10,000 Cossacks, I would have conquered the whole world.” (Napoleon Bonaparte)

The history of Ukraine is a fascinating story of how cultures, political systems, religions, and power have met, intersected, morphed, and expanded. The region was relatively sparsely populated for much of ancient history, a wilderness of rivers, forests, and steppes, but that does not detract from the rich historical development of the region. A huge area, Ukraine is wedged between the continents of Asia and Europe, and its position as a crossroads ensured there was fierce competition for influence there. Historians have called the formation of Ukraine the “establishment of a unity among three zones...the ports of Crimea and the coast, the rich steppe heartland, and the forests”, based around the themes of “geography, ecology and culture”.

Today’s Ukraine is a huge country, incorporating an area over 600,000 square kilometers and home to 42 million people. It stretches from the Crimean Peninsula on the Black Sea in the south to Belarus in the north, Russia to the east, and Poland, Slovakia, and Hungary to the west. The Dnieper River is the region’s key waterway, running into the Black Sea, while the Danube Delta also forms its border with modern-day Romania to the southwest. A steppe exists in the middle of the country while the Carpathian Mountains feature in the west. This geographical formation has influenced some of the country’s key historical developments, as well as the location of its major settlements. Kiev (known today as Kyiv) is, of course, the longstanding capital of the country, located on the Dnieper River in the central northern part of modern Ukraine. Lviv is another large city, located in the northwest near the border with Poland. Odessa is a seaside city on the Black Sea in Ukraine’s southwest, while Kharkiv, Luhansk, and Donetsk are major cities in the country’s east, close to the Russian border.

Following a century of autonomy for the Cossack state, the Hetmanate, Ukraine was essentially partitioned in the late 18th century between the Russian Tsarist Empire and the Austrian Habsburgs. The turmoil of the early 20th century, however, radically changed the status quo. The First World War followed by the Russian Revolution in 1917 gave Ukrainians the chance, and hope, of an independent state. This had been initially propped up by the Germans in 1918, following the peace treaty between Russia and Germany at Brest Litovsk. When Germany was ultimately defeated, however, by the Entente powers in November 1918, Brest Litovsk was essentially void, with the Germans retreating from any involvement in Ukraine.

In the wake of the war, Ukraine still had designs on autonomy, hoping to operate outside the new Russian configuration, the Soviet Union (or USSR), but with Lenin-backed communists already in charge in the eastern Ukrainian city of Kharkiv and wanting to bring Russia’s former provinces into the new union, Ukraine was inevitably drawn into the bloody civil war that followed.

Modern Ukraine: The History of the Country Since the 20th Century examines the turbulent history of the country in the last 120 years, from being absorbed by the Russians to the ongoing conflicts. You will learn about modern Ukraine like never before.

What listeners say about Modern Ukraine