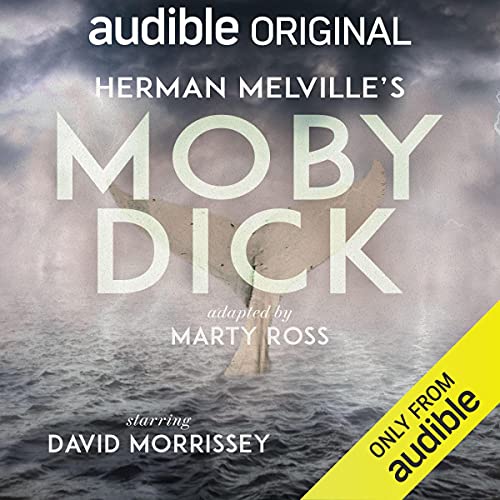 What listeners say about Moby Dick

This was superb. This is the best audio drama of this length I have ever heard. The acting by everyone was excellent and David Morrissy as Ahab was a revelation - he is utterly convincing throughout. The quality of the sound design really stands out and grounds the drama in atmosphere. I can only imagine how hard it was to come up with all the sounds for the sustained sea scenes and the hunts. I’m sure this will win awards for directing, production and acting. Thank you to everyone, this really was a stunning and perfectly sustained drama.

It took a while to get into this book but was soon hooked. Although the theme is now politically incorrect. It is a story about loyalty obsessions and freindships. well worth the read.

An A1 Classic that can never be forgotten

I was on those boats I was whaling with those men it was real, fantastically performed by all involved a true master piece of literature that will go through decades into the future.

Excellent Very different to the other audio books

took a while to get into but then I could not stop listening. highly recommend.

A very realistic performance, excellent sound effects, story told very well albeit a bit long. Highly recommended. This is the second book I have listened to in as many days that were produced by the same London studio, the other one was brilliant too, perhaps Audible should mention the studio name in their advertisements.

Well done, can't argue with the price. Would be a good introduction of you don't know the story.

Fantastic, atmospheric adaptation. I hadn't read the novel for years and this was a wonderful way to revisit it.

It was a WOW for me all round.
The characters, the sound effects, it was like I was there, hunting whales.
I even shed a tear when my favourite hunter died, a realy gripping story.

A whale of a tale

I have heard people talk about this book, but have never read it. I wasn’t sure it could live up to its reputation but it certainly did. I was spellbound by this enormously exciting and tense tale of one man’s obsession with the white whale, Moby Dick. The acting and production are completely excellent. It couldn’t be better. A thrilling story indeed!

Is this for real?

The story is great. Nothing has changed there. The casting for this is nothing short of atrocious. It sounded like the casting director told everyone, "Okay, I know it's a serious classic novel. But I want everyone to talk like it's a big joke and be as silly as you can. A sarcastic tone will help." All I can picture when Cpt Ahab talks is Nick Offerman from Parks and Rec. Great voice, but a very goofy inflection. Most of the crew sound like modern frat boys who were paid in beer to do these voices after the first choices got sick. And then the second choices couldn't get off their real jobs to do it. Then the third choices didn't want to be paid in beer.

I was look for a fun classic novel and gave this a try. Wow, what a wonderful surprise! It's VERY well written and performed

More importantly, it covers a number of modern issues staged in a whale boat with a bunch of men... It's worth your time if you want to be entertained!

This was my first review and podcast that I actually enjoyed and finished listening to. The actors made all the characters came to life.

A Whale Of A Tale I Tell You Lads

A Whale of tale or two. A magnificent performance. Far better than any movie ever made from Melville's rousing tome.

The crew has brought this amazing story to life. Had an absolutely marvelous time listening!

Better than the movie,

beautifully achievement, a great podcast, guaranteed hours of enjoyment a pleasing way too pass your time

I more than loved it! just amazing. the sound effects, the cast, everything was beyond perfect.