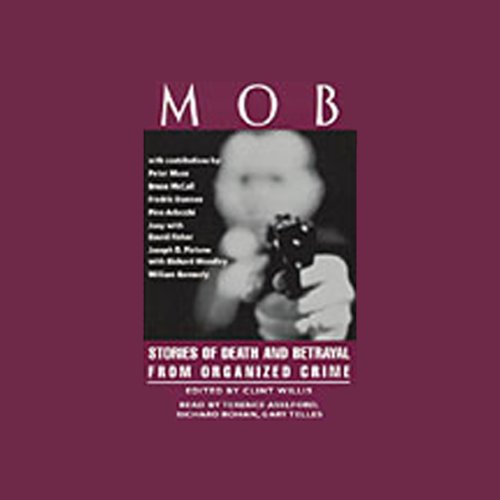 Mob opens terrifying windows on the brutal and mysterious world of organized crime. You'll meet murderous wiseguys, scheming Dons and undercover agents risking their lives to break the Mob's most powerful syndicates. The picture that emerges from these stories is astoundingly complex and all too human: a world of warped desire and violent consequences that is at once shocking and fascinating.
©2001 Clint Willis (P)2002 Listen & Live Audio, Inc.

"If you're interested in criminals and social deviance, this audiobook is for you." ( AudioFile)
"An excellent sampler for this genre; highly recommended for public libraries." ( Library Journal)
"The variety of Willis' 13 selections makes for an anthology crime buffs can't refuse." ( Kirkus Reviews)

This was not what I expected. It's just a bunch of disjointed stories from many books. Most of which are not very good. I would reccomend NOT getting this audiobook. The best story is from Wiseguy the Donnie Brasco book. But this short excerpt doesn't save this audiobook. It just makes me want to get Wiseguy.

This is a good book with captivating stories of mob life. A good history of the mob is provided with characters well developed. The naration was excellent.

These are mostly excerpts from fairly familiar popular mob books -- Donnie Brasco, Underboss, etc. There are stories of Sammy the Bull, Gregory Scarpa Senior, some unnamed but very prolific and connected hit man (who claims the Joey Gallo hit, so he'd better get in line with Sheeran and soon), and a few guys in the old country. The scenes are mostly from the 1970s onward through the fall of the classic mob. Some interesting weird smaller, colorful characters flash through -- as in, some flamboyant cokehead Sammy Gravano dealt with and did away with, etc. Other than that, there doesn't seem to be a lot of rhyme or reason. It does give a good flavor and sense of atmosphere of being in the life day to day. The book ends with an analysis of the attitudes and culture that led in Italy to cosa nostra, tied into a few actual stories -- that part was very interesting to me, and made a lot of sense.

Good. I enjoyed and loved these real stories some of which I would not have believed if it was not not for this book.

Perfect for fans of the Mafia story genre. Lots of narrators and short stories means if you don't like a voice, don't worry it will only last for a few minutes.

Thrilling book if you like crime stories. Great narration.