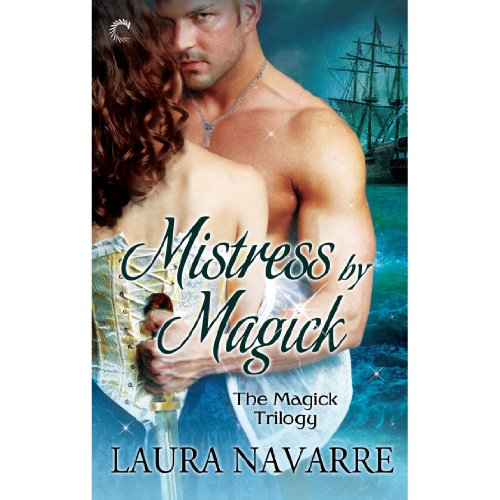 Lady Jayne Boleyn lives in disgraced exile, far away from the scandal that destroyed her reputation. She would do anything to return-even seduce a daredevil captain and spy on enemy forces with only her barely controlled Fae powers to protect her.

The Spanish dons resent pirate Lord Calyx's leading role in their impending attack on England, but his rivals would kill him outright should they ever learn he's not only half-Spanish-he's also half-human. On the lookout for spies who might unmask him, Calyx's suspicions settle on Jayne...but so do his lusts.

Duty demands Jayne and Calyx be enemies, but fate has made them loyal lovers. Together, they may thwart the combined malice that threatens to alter the fate of Europe. But as a final confrontation looms, Jayne must choose between her long-cherished redemption and the precious, newly discovered secrets of her heart.

Book three of The Magick Trilogy.

First off, did you see that cover? That cover is awesome! It makes sure you know ahead of time that it has all you are going to be looking for in a pirate novel. I was almost giddy when I got this book. I am not a huge fan of historically set stories unless of course, it contains dragons, pirates, damsels in distress and pirates. Wait, did I just say pirates twice? Ok, you get the picture here.

I really liked this book and I am a bit disappointed that I came in at book three. However, I plan to rectify that soon because I WILL be buying the other two books. Laura Navarre weaves a magically enticing romance story here. Everything that good pirate stories are all about.

This book is magical, captivating and romantic in only a way that it can be. It is in a class of its own and I think I have found a new TBR author!