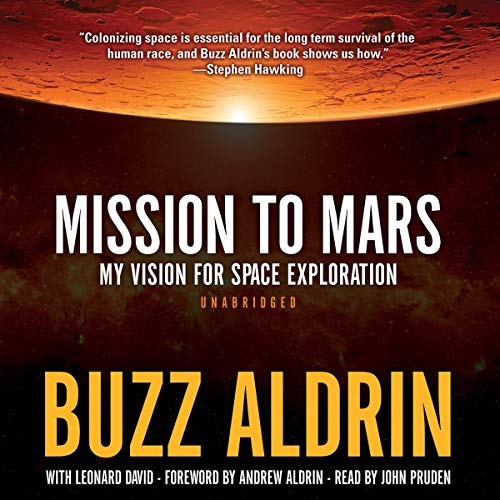 By: Buzz Aldrin
Narrated by: John Pruden
Try for £0.00

Legendary "space statesman" Buzz Aldrin speaks out as a vital advocate for the continuing quest to push the boundaries of the universe as we know it. As a pioneering astronaut who set foot on the moon during mankind’s first landing with Apollo 11 - and an aerospace engineer who designed an orbital rendezvous technique critical to future planetary landings - Aldrin has a vision, and in Mission to Mars he plots out the path he proposes, one that will take humans to Mars by 2035.

"Colonizing space is essential for the long-term survival of the human race, and Buzz Aldrin’s book shows us how." (Stephen Hawking)
"Any time an Apollo-era astronaut steps forward with ideas for our future in space, it’s time to stop what whatever we’re doing and pay attention. Buzz Aldrin, one of the first moonwalkers, has no shortage of these ideas. And in  Mission to Mars he treats us to how, when, and why we should travel there." (Neil deGrasse Tyson)
"Buzz Aldrin has been as far from Earth as any human being, and now he’s leading the charge to go much farther, to our next epic destination: Mars." (James Cameron)

What listeners say about Mission to Mars

I guess that's fitting given the book. Well thought out and a very thorough look at the options we have to go to Mars.

This audio book was disappointing. I love Buzz Aldrin for his commitment, his service to mankind, his heroism, and especially for his defense of his honor by punching a media representative who claimed the moon landing was faked and that Mr. Aldrin was a liar.
Despite his brilliance, his cringe worthy ego is forefront in his book continually overshadowing all else he is trying to relate.

Buzz Aldrin reveals how permanence on Mars can be accomplished, and tries to convince us that it needs to happen.

I would like to know the authors thought's now. He has a passion which I admire. I don't agree with some of his ideas but they are creative and his goals are clear. He sounded redundant at times.

Humanity's future is on Mars

Amazing book! Buzz Aldrin articulates with great confidence both why we should go to Mars and how we should go about doing it.

So far, it seems the author is justifying going to Mars INSTEAD of the moon because of...? There are so many reasons why we should focus on exploring Mars as a more viable place for humans than the moon, but this book does not tell us about those. Instead, it seems to focus on a narrow argument about exploration (oh the moon, we’ve been there, so we should use our money to go someplace else now) and commercial value. The narrator however is amazing and may be the only reason I listened to the whole book.

The narrator was wonderful. Made it very easy to understand and follow the story. KUDOS

This was a very interesting and thought-provoking book with a lot of interesting ideas and predictions. It definitely gave me additional things to consider in a trip to Mars and can act as a clarion call for movement in that direction.

However, even though it was written in 2013, it really feels like it needs to be updated. Simply too much has happened, both technologically, socially, and politically and the subject matter is very quickly evolving.

The book itself is interesting. I love buzz, he’s a great guy. I just felt like it could have been half as long if he didn’t keep repeating the same ideas in many different chapters. That said over all it was very good.

Dr Rendezvous has been at this for a long time, I think we should listen to him, his ideas might not be perfect but we have to make a new start! The world has lost it's way and we need to get back into the groove..