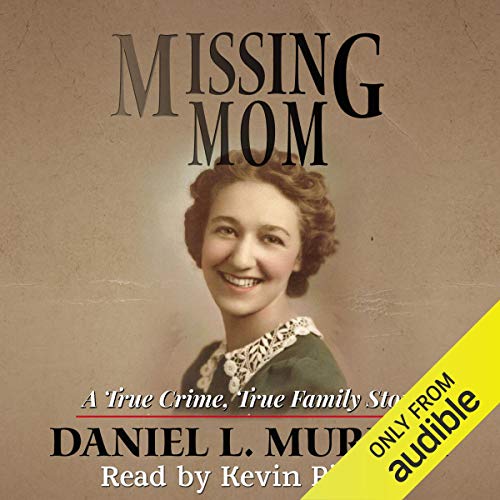 By: Daniel L. Murphy
Narrated by: Kevin Pierce
Try for £0.00

This true story begins on a sunny morning in 2003, just before the Fourth of July, outside of Flint Michigan, when an 80-year-old grandmother has mysteriously disappeared from the face of the Earth. She was my mother.

Three days after she disappeared, the charred remains of her new car were identified, after being completely destroyed by an intentional fire; but she was nowhere to be found.

For the next three months, my family and I searched for her, and this book chronicles that search, and eventually her memorial service, funeral, and the trial of the person who stood accused of killing her. It is an odd and twisting tale about robbery, kidnapping, a lesbian love triangle, attempted murder, and actual murder.

Brilliant book of a families quest for justice

Loved this book, sad at times but that's the harsh reality of senseless murders. It's very well written and takes you through the families painful journey from beginning to end. Kevin Pierce is an amazing narrator, I think I have every true crime book he has narrated. He done the Murphy family proud. I highly recommend this book, difficult to put down once you start.

Felt it took a while to get into (nearly gave up as narrator is a bit boring, I found) but glad I didn't.

Would you listen to Missing Mom: A True Crime, True Family Story again? Why?

I so enjoy Kevin Pierce's performances, I am likely to dust this off and re-listen to it in a few years.

The narration. Besides that, this is just a beautifully-written book, well told. A wonderful listen, full of rich description and thoughtful reflections on a memorable and bittersweet story. The book is informative, and delivers procedural details without getting mired in them, while also providing enough context to ensure that those persons involved were developed as fully human -- helping the reader to empathize.

All of them. Pierce is such a pro. Never over-acts. Clearly differentiates the characters. Brilliant delivery. I am such a shameless fan.

The epilogue. Full of hope and new beginnings. Such a brave family, and the author in particular was genuinely inspiring. Won't say more to avoid spoilers.

I have grown to trust and enjoy Mr. Pierce's true crime productions so much that as soon as he releases one I immediately buy it without even reading the full book description. As an Audible client with hundreds of titles who achieved the "master" level of listening hours long ago, I've sampled many narrators with various levels of talent and lack thereof. Mr. Pierce is my #1 favorite actor of all time, and any author would be *beyond* lucky to sign him.

Such a sad but great true story

Really enjoyed this book I did the audible in a day I couldn't stop listening. The narrator did a fantastic job telling the story. Unique perspective from the family. I was happy to listen to the court transcripts in which most of the story came out. Worth a read for sure.

This is a murder mystery based on a true story. I can understand the author waiting a decade to publish this book, as it is so personal. It

gripped my heart from start to finish.


The narration was exceptional with the right inflections in all the right places.

A great listen and well written story that kept me hooked. The narrator was excellent and really brought the story to life. I don’t usually listen to books in this category, but will be looking for more from this author in the future.

A True Crime that is truly worth the listen

Would you listen to Missing Mom: A True Crime, True Family Story again? Why?

No but I would like to have the transcript of the families words at the sentencing of Kimberly Morgan. The reason I wouldn't want to listen again is because it is very sad and I'll not forget any of it.

What was one of the most memorable moments of Missing Mom: A True Crime, True Family Story?

It may seem odd to say this but actually the last few minutes when Daniel was sharing all about what has happened since 2003 and especially about Flint, Michigan. We have heard on the news lately about the bad water in Flint and so this was good to know that if this town could help this family as it did and the police and legal teams could take care of getting justice for "Dort" then they surely will take care of the bad water issue in Flint and I am praying they do so! Also, Kimberly's testimony was beyond belief and thankfully the prosecutor was at her finest in this courtroom and evil didn't prevail.

He does an excellent excellent job in reading these types of true crime and court room books. He has a way of making you believe the author is speaking and his inflections are perfect and also you just have a sense of his own heart being spoken as he talks. I can't imagine any other person doing a better job.

As difficult as this book could have been to listen to it wasn't because I knew from the beginning Daniel would't have written it if justice hadn't been served. May Kimberly never be given her freedom.

One of the hardest things to ever go through is to lose a loved one, and to write such a great book about it has to be hard. The author didn't show just how hard as the book flows from beginning to end. I hardly ever read books of this nature, but I'm so glad I did. I would recommend this book to everyone, as it's well worth the credit. The narrator did such a great job. His voice sounded like it was made to read this book.

simple book that does what it sets out to do

Missing Mom looks at the completely needless crime of murder through the eyes of its true victims, the family and friends of the deceased. There are no twists, no turns, no surprises, but there doesn't need to be, nor should there be. This is just an outlet through a family's journey of grief and it really shows. This audiobook was provided by the author, narrator, or publisher at no cost in exchange for an unbiased review courtesy of Audiobook Blast.

What did you love best about Missing Mom: A True Crime, True Family Story?

Usually I read true crime books written from an investigator's point of view; this book offers a glimpse into what it's like for a family when their matriarch goes missing and turns up many weeks later, murdered. Written and read by one of her sons, this book kept my attention through the search for his mom, how the police uncovered what had happened to her, and the subsequent trial for murder.

I appreciated how the family moved through this tragedy and came out the other side. Although the victim was very religious, the book did not get overly "preachy" about religion despite being a central part to the story and to the healing of the family.

there are a couple times, more than what I like that the writer repeated himself. that is one of my pet peeves. A couple things could have been omitted from the book as I myself fast forward. I did like his character development and I love Kevin Pearce reading this. This book is worth purchasing.