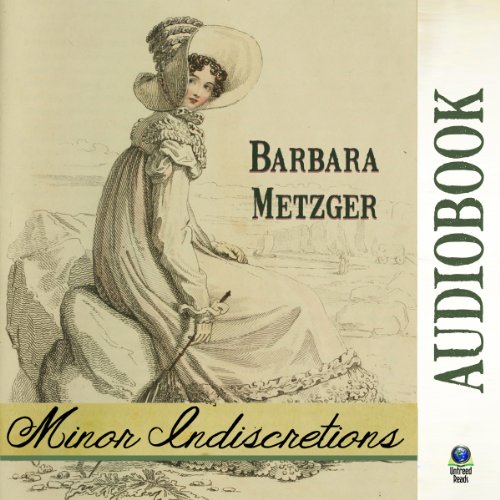 By: Barbara Metzger
Narrated by: Stevie Zimmerman
Try for £0.00

Though barely out of the schoolroom, Melody Ashton was determined to save her mother from scandal. Guardian of several "orphans" (in actuality the illegitimate children of the ton!) poor Mama was accused of pilfering contributions. To make matters worse, the infuriatingly handsome Lord Coe had accused them all of blackmailing his sister, whose child resided with them!

After such rudeness, his offer to make Melody his mistress was the outside of enough! Ignoring all lessons learned in Mingleforth's Rules of Polite Decorum, she told the rake exactly what he was - starting with reckless reprobate and on to debauched womanizer, self-righteous sapskull, and buffle-headed bounder.

Lord Coe was quite confused! Never had a conquest proved so difficult. And never had he feared he was falling so helplessly in love...!

What listeners say about Minor Indiscretions

Nice story with some good humour, a bit short but enjoyable. I would wish for another narrator.

The story is really fun and sweet. Stevie Zimmerman is a pleasure to listen to. However, there are sections of chapters that have silent gaps. Sometimes when the audio resumes Zimmerman re-reads the scene. Chapter 11 on the list (chapter 10 of the book) and maybe one or two other chapters contain these errors. I'm uncertain if there is a section missing too. The errors throw one into confusion and break the flow of the story. Nonetheless, the story and the reader were enjoyable.

My least favorite Metzger so far...

I hate to say this but I just thought this book was not that good. It was fine! But I am usually raving about Metzger books and this one just wasn't worth the rave.

No sound for 1 minute

No sound for 1 minute in chapter 10. From minute 10:46 to 11:46 complete silence. I initially thought there was something wrong with my headphones, but nope just no sound for one full minute.

Although I generally want a little sex in my romance this books offered so much more It is just like a warm fuzzy that comforts the heart. And Stevie Zimmerman delivers a stellar performance

I always enjoy this story over and over again. It's so amusing and lively. Stevie Zimmermann makes it more so but her excellent narration.

An odd assortment of characters written with wit and flair. Absolutely no real heat, and with the always excellent Stevie Zimmerman narrating this is a regency romp to enjoy!

I loved the part in chapter 19 when little Harry said that if things got really bad, he'd find out who his mother was and ask if she needed a new groom....