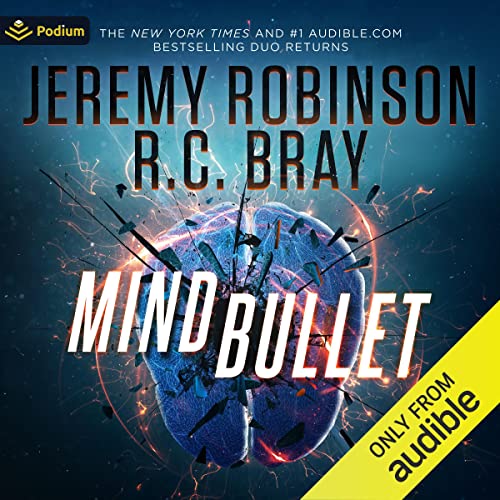 A telekinetic assassin’s quest to avenge his parents’ murders triggers an all-out war between an eccentric cast of killers, from the New York Times and number one Audible.com best-selling duo Jeremy Robinson and R.C. Bray.

Jonas kills people...with his mind. He reaches out, focuses for a moment, and feels a snap of pain between his eyes. Then his target falls over dead: a hole in the center of their brains. The cause of death is unknown to all aside from Jonas, and his lone companion, Bubbles, a sarcastic AI with aspirations to be more human, or a serial killer. One of the two. Maybe both. Jonas calls his ability...mind bullet.

Sensing Jonas is lonely and depressed, Bubbles arranges for Madee, a Thai delivery woman by day, and a thief by night, to enter his life. For a moment there are sparks. But chaos follows as the people Madee last robbed catch up to her. They also happen to be the Shrieking Ninjas. After surviving the assault, Jonas and Madee find themselves on the run with a 10-million-dollar hit called on Jonas.

Killers from all over the globe pursue the pair as they run for their lives, headlong into Jonas’ mysterious past, uncovering the surreal origins and extent of his abilities. They discover a dark and twisted history that threatens to unravel his mind and leave him susceptible to control. Working with Bubbles, Madee, and a growing list of new allies, Jonas battles his way through waves of assassins, some with abilities like his, all to protect the world from a recently discovered, untraceable weapon of mass destruction - himself.

What listeners say about Mind Bullet

From Kaiju to paranormal activity, lost worlds and worlds and universes to come, Jeremy Robinson excels, add to that R.C Bray, the most fantastic narrator in the history of audio books, you can’t go wrong, listen and enjoy, you won’t be disappointed, in my personal opinion anyway.

As per usual Jeremy has produced amazing novel thats sure to hit the number one spot on Audible. This is definitely worth a listen and I can’t wait to see what he comes out with next.

Really good story, some great topical references sprinkled in. The story kept a solid pace and didn't feel like it was padding.
A joy to listen to.

Really enjoying Jeremy Robinson pulling all these stories together. Lord Bray is once again the perfect fit for the story.

I have listened to everything Jeremy has written and he goes from strength to strength. This story, like The Dark is so well crafted that it is easy to believe the events are really happening…. No spoilers but I am so pleased that there will be more along the same lines…. Very happy with this revelation. The performance by His Royal Brayness was his usual monotone shallow mumbling …. Sorry Bob, I mean brilliant!!!! It is worth two credits in my humble opinion - thank you Jeremy and Bob for helping me navigate another Icelandic Winter.

Another super unique and entertaining story.

Great characters and fun storyline. I love all the tie-ins to his other novels. I can’t wait for the massive crossover novel coming soon.

This one has kept me engaged non-stop, I find myself taking a few extra laps around the block when I get home to listen to a little more in the car!

The action draws you in and holds you by the throat.
The characters make you want to know more about them. This one includes characters from a couple of his other books. It is great as a standalone. Jeremy Robinson does not disappoint.
This book is full of "WOW" moments and it all pays off at the end.
I loved it. I absolutely loved it.

This is a lighter read after Jeremy Robinson's previous book, The Dark. I love this world he's building with all these amazing characters.

This works as an entertaining fun stand alone book, but I loved all the little Easter Eggs and how it ties in overall with the other Infinite timeline books. I can't wait for the huge crossover, Avengers style.

Telekinetic assassins? ✔
Snarky A.I.? ✔
Explosions, weird humor, and a bunch of really crazy stuff too! This is another hit for Jeremy Robinson, and a great addition tying together Tribe, The Dark, and now Mind Bullet (with a couple of cameo appearances for readers of his other series). If you're a first time reader, no worries! It makes a good stand alone book too.
R.C. Bray, as always, does a fantastic job bringing characters to life and is a pleasure to listen to.

From the very first paragraph I was absolutely hooked and knew I would love these new characters. I found myself often laughing uncontrollably and constantly thinking this should DEFINITELY be a movie. As much as I really would like to see several of Jeremy's books on the big screen, it's really hard to imagine hearing the voice of anyone other than R.C. Bray. I can't wait to find out what happens next in this universe. If this was book one for you from Jeremy Robinson check out his other works. He literally NEVER disappoints.

Jeremy Robinson is truly the master of the “Holy S***” moment. You honestly never know where the story is going to take you, except that it will be a wild ride that keeps you guessing. I love how so many characters from preceding books are coming together, foreshadowing a huge event that is obviously coming soon. Looks like New Hampshire is the place to be. The book is already awesome, but is further enhanced by the unmatched talent of RC Bray. You won’t be sorry you bought this audiobook.

What an Amazing book!!

This was such a unique, exciting, and entertaining story! I highly recommend this and every other book by Jeremy Robinson!

Excellent work by the dynamic duo. RC is the Master. Can't wait to listen to the next one.

I loved this book. I cannot wait for the next book. Jeremy Robinson created another great story with Non Stop Mind Blowing Action. RC Bray also did another spectacular job with the narration of this book.