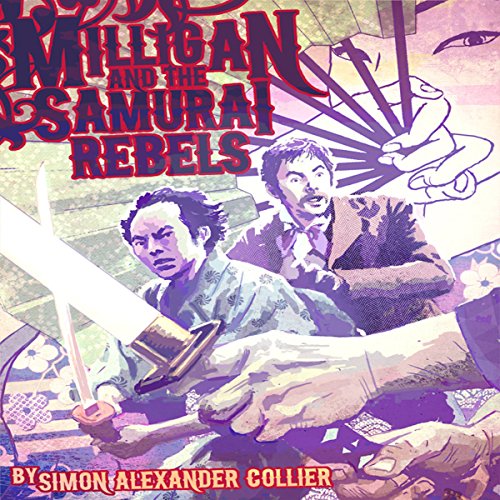 Milligan and the Samurai Rebels

Milligan and the Samurai Rebels is a humorous historical novel set in the Japan of the 1860s. The Shogun has been forced by the threat of Western firepower to re-open Japan to the outside world, while samurai outraged at this decision are scheming to topple the Shogunate and re-establish Imperial rule. In parallel to this struggle, Britain and France are fighting by every means except open warfare to establish themselves as the leading influence on the government of Japan and secure the accompanying trading privileges.

Into this maelstrom steps Robert Seamus Milligan, a young British diplomat with a weakness for women and drink, who has joined the diplomatic service only to escape a contretemps back home. Upon his arrival in Japan and entirely against his will, he is immediately plunged into the conflict between Japan and the West, between the Shogunate and Imperial forces, and between Britain and France.

Milligan survives several real historical clashes plus a Royal Navy Commodore on the warpath, humiliation at the hands of a French spy, sex in the bath with a female Japanese aristocrat, life as a Satsuma samurai, and a sumo bout against a homicidal maniac - thanks on more than one occasion to his Japanese servant, Miyazawa, and with much more credit than he deserves.

"A thoroughly impressive first work, Simon Alexander Collier has done his homework...It's a fun book and it's a page turner." (Robert Whiting, author of You Gotta Have Wa and Tokyo Underworld)

"The historical background has been carefully researched, but the reader needs no prior knowledge of history to enjoy the tale. He or she needs only to keep turning the pages as the plot twists and turns." (Sir Graham Fry, former British ambassador to Japan)

What listeners say about Milligan and the Samurai Rebels

An impressive narration of book one and a fitting interpretation of the bumbling Robert Milligan and array of supporting characters. It was fun to take in the adventure as a listener, as well as the history around which Milligan’s sometimes ludicrous scuffles and scrapes occur. The novel, often brilliantly funny, is informative and entertaining enough, but this audio version is an equally worthy addition with which to enjoy the author’s work.

exciting fiction in an exciting time

i really enjoyed the story. The characterisation was good.
Nsrration was excellent and in keeping with the character of the protagonist.
My only dissapointments were
- the pronunciation of Japanese words was? at first quite in keeping with the protagonists low level of language skill. i wish the pronunciation had improved as his skill improved.
- the story suddenly ended with an unlooked for surprise event while there were many historical events to continue with.

I am really impressed with this novel. It manages a great blend of wry humor, exciting predicaments, and historical context for a really interesting adventure. I didn't know much about Japanese history, but this was easy to follow and very informative. It makes me want to learn more about both this time period and Japan in general. I liked how the self-effacing and bumbling protagonist along with his more competent Japanese companion allowed the author to provide a somewhat even-handed presentation of both Japanese and western perspectives. I'm looking forward to the Audible version of the sequel.