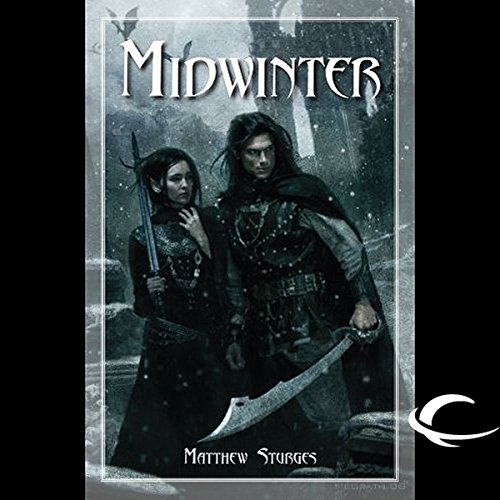 Winter only comes to the land once in a hundred years. But the snow covers ancient secrets: secrets that could topple a kingdom.

Mauritaine was a war hero, a Captain in the Seelie Army. Then he was accused of treason and sentenced to life without parole at Crere Sulace, a dark and ancient prison in the mountains, far from the City Emerald. But now the Seelie Queen - Regina Titania herself - has offered him one last chance to redeem himself, an opportunity to regain his freedom and his honor.

Unfortunately, it's a suicide mission, which is why only Mauritaine and the few prisoners he trusts enough to accompany him, would even dare attempt it. Raieve, beautiful and harsh, an emissary from a foreign land caught in the wrong place at the wrong time. Perrin Alt, Lord Silverdun, a nobleman imprisoned as a result of political intrigues so Byzantine that not even he understands them. Brian Satterly, a human physicist, apprehended searching for the human victims of the faery changeling trade.

Meanwhile, dark forces are at work at home and abroad. In the Seelie kingdom, the reluctant soldier Purane-Es burns with hatred for Mauritaine, and plots to steal from him the one thing that remains to him: his wife. Across the border, the black artist Hy Pezho courts the whim of Mab, offering a deadly weapon that could allow the Unseelie in their flying cities to crush Titania and her army once and for all.

With time running out, Mauritaine and his companions must cross the deadly Contested Lands filled with dire magical fallout from wars past. They will confront mounted patrols, brigands, and a traitor in their midst. And before they reach their destination, as the Unseelie Armies led by Queen Mab approach the border, Mauritaine must decide between his own freedom and the fate of the very land that has forsaken him.

I enjoyed listening to this book, once I got used to the narrator's style. It has all the elements of a good fantasy novel. It's not the most original fantasy ever written, but the characters are good, the story moves along well and it's quite compelling, difficult to turn off! The author has clearly left room for a sequel, but this can be taken as a stand-alone novel. Well worth a listen.

This is not a great book. It's not exactly terrible either, but the story is weak, the characters pretty flat and it just doesn't feel a rich or well constructed as, for example, Robert Jordan's 'Wheel of Time' novels.

Don't bother unless you get it for free and you really have nothing better to do.

I really like this book it is a good story and some intriging if somewhat stereotyped characters. Nice unfolding of the plot, that is to say not all at once and some good quality lyrical descriptive stuff.

The narrator is a bit uneven in his delivery and for the English he mispronounces words, for Canadians I guess he doesn't. Minor irritations though. Many narrators do this.

If you want a story that doesn't let all the plot out at once, you get the same info as the characters do at the same time they do, then this is worth a listen. They do seem to have nice set of get of jail free talents or "gifts" as they are called which help with escaping and what not!

Overall I have really enjoyed this book, but I may have enjoyed it more if I'd read it myself. The narrator, Kevin Pariseau, has a pleasant voice, articulates well, and does an excellent job of creating character voices! The first few chapters, though, were difficult to follow. His speech was alternately stilted and then rushed, pausing in the strangest places in what has to be the same sentence or thought. It seems as though he hadn't read the book before he began narrating. By about a third of the way, he got on track, and I enjoyed the story heartily. Recommended listen.

Sturges has been writing comic books for a long time now, and this is his first attempt at a novel. It's a quest fantasy novel, but the object of the quest isn't made very clear for a long time, and that's why I'd give the story a C+/B-. It's an interesting world of fairies and humans and there's portals for going from one world to another, so it has all the stuff of good fantasy, but just doesn't completely satisfy. Narration is excellent, I give it an A, making the whole experience about a B. I hope Sturges keeps writing novels, because he is able to make great stories work on the comic book page.

Would you consider the audio edition of Midwinter to be better than the print version?

Good story worth a listen, though it takes some effort to get past the narrator's strange, halting recitation. Matthew Sturges did write a follow-up to this novel that may be worth the read as well, though I haven't yet read it myself.

Would you listen to another book narrated by Kevin Pariseau?

I won't seek him out. Pariseau's halting recitation is distracting. He should learn the reasons for punctuation and consistently apply them to his reading. At least he does have a nice voice and speaks normally sometimes.

I'd be interested to hear 'Office of Shadow', Matthew Sturges' follow-up to 'Midwinter'.

I listened only two hours of it. The story was fine, but the narration completely ruined the experience. The voice and intonation was very light and with no vibrancy, making even tough, battle hardened characters sound like a bunch of weaklings. The narration is just void of any emotion. I might as well have my PC read it for me. I just could not go through the whole book.

The story itself could have been tolerable and perhaps even worth listening to if someone else had read it.

Give me a hero AND a worthy villian - not here

This story is weak and the characters were paper-thin. They just follow along according to the plot and never come alive.
Someone said that this is the author's first novel after writing comic books and that is exactly how this feels. It felt as if I was riding along with the author as he outlined the story, not the final version ready for publication.
There is nothing about this book that made me stand up and cheer, want to cry, or even care whether or not they succeeded.
Without giving the ending away, the build up between the two central figures is fairly well done, but their confrontation is seriously lacking in depth. It is one of those build, build, build, and then, BAM, it is just resolved. The loser was not worthy of even being in the battle. The author missed the point of our wanting to see confrontations between heroes and villians who are equals at least, or better yet, a hero who is hopelessly out-classed. We want to see doubt and struggle. This does not meet this need in any way, shape or form.
Don't waste your credits on this one unless you have read EVERYTHING else available.

Fair book to listen too

Just like the other review it could use a different reader. The book it self tended to jump around more than I am use to but over all the book was still pretty decent to listen and a fair story.