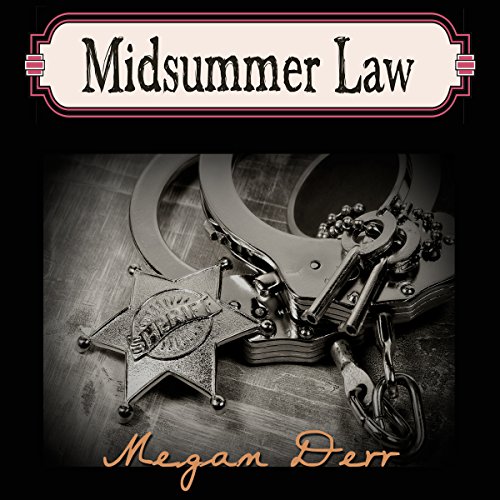 Being Sheriff is a hard job, even in a town like Midsummer. The law is the law, and when magic is thrown into the mix, everything gets more complicated. Kirby is lonely and worn out, and his latest unpleasant duty is contacting the brother of a recent suicide. Given the complications surrounding the tragedy, and just how loathed the deceased man was in Midsummer, meeting his brother is not something Kirby is any hurry to do.

But when he arrives, Merry is nothing like his deceased brother-nothing like anything Kirby has seen in a long time, and quite possibly a reason to feel things Kirby thought he'd never feel again.

What made the experience of listening to Midsummer Law the most enjoyable?

What was one of the most memorable moments of Midsummer Law?

All of it, it's only two hours long.

EVERYTHING! The man could recite the phone book and make it sexy.

Kirby is the town Sheriff in Midsummer, he is also a pretty talented witch. He’s been alone for a very long time, having met his true love when he was just a child, then losing him when they were teenagers in a car accident. Kirby can understand the pain of loss, so the last thing he wants to do is contact Kerry’s twin brother Merry, and tell him his twin is dead. That he died on Kirby’s watch.

When Merry roll’s into town to settle his deceased brother’s affairs, Kirby is immediately smitten with the little blonde that has a penchant for leather, lace, lipstick and nail polish. Kirby has always been attracted to blondes that can pull off the sexier side of the goth look, and Merry fits that bill to a T. The attraction is mutual, but the two supernatural creatures live eight hours apart. Will the bond that is growing be strong enough to go the distance?

Megan Derr and Paul Morey continue to carry this series of short stories with a wonderful marriage of dialogue and words. This book amped things up a notch from the last book though, thank god. We finally learn the reason why Kerry was cursed inside the city limits of Midsummer, and why while he and Merry were identical twins, they couldn’t have been more opposite. It was a lot of fun listening to Merry tame the sometimes moody and often temperamental Sheriff that has mastered the art of scowling.

This one was short, sexy and steamy… my three favorite colors! Not only was the story well written and rich with content, it was flawlessly narrated by the sexiest voice on the planet, Paul Morey. I seriously think the man could sit down and read from the phone book and have me hanging off of every word, his voice is so damn sexy!
A must read if you are a fan of shifter stories, Derr’s writing, Morey’s vocal chops or just love a short, sexy read.