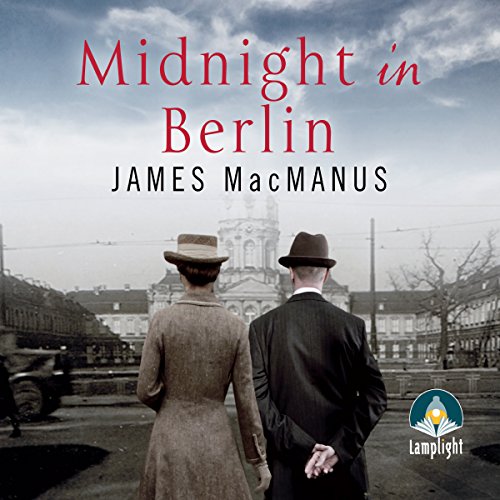 By: James MacManus
Narrated by: Peter Noble
Try for £0.00

Gathering vital intelligence, Macrae is drawn to Kitty Schmidt's Salon - a Nazi bordello - and its enigmatic Jewish hostess, Sara Sternschein, who is a treasure trove of knowledge about the Nazi hierarchy in a city of lies, spies and secrets. Does she hold the key to thwarting Hitler?

What listeners say about Midnight in Berlin

listen of the year

Great story; great narrator not a lot else needs to be said in twenty words...

This is a truly fantastic book. A gripping story wrapped around the events leading up to the second world war in Nazi Berlin. The characters are very well written. The Berlin of 1939 is so vivid with the writing. Really really worth a listen. Essential for anyone interested in this point in history. As an Englishman, a certain amount of shame also.

Top notch performance from Peter Noble. One of the best books I have downloaded in three years. Five stars.

This is a great book like all fiction, there are many elements of historical reality .


The battle at the British Embassy in Berlin between diplomats who could see what was coming in late 1938 and early 1939 and those who like the government they represent chose to ignore the evidence in a desperate effort to avoid war with the German's and a replay of the carnage of the 1914-1918 campaign.


In Midnight in Berlin, the new military attache, Noel McRae comes across a Gestapo run house of pleasure during an outing for intelligence. A couple of days a few days he sees one of the women from the salon, Sara a Jew who is being held hostage as a sex slave to ensure the compliance of her twin brother and mother who are captives at the mercy of the Nazi regime.


Although the book is a work of fiction. Like most good works there are many facts that are true, indeed many of the characters portrayed in the book including the ambassador, Sir Neville Henderson were actually in pod at at the time.


This audiobook is a compelling listen, with great narration it flows easily. I would recommend it

Absolutely loved this book, the narrator was perfect and there was nothing I did not like about it.
A interesting story which will have you gripped from the start, hindsight is a wonderful thing but despite what transpired it is hard to listen to the blinkered and idiotic reactions of the British government and some of their staff.
The main characters are complex, often hugely flawed and fighting to be heard in a world that doesn't want to listen. Highly recommend.

Held our attention to the throughout, well narrated and appreciated the ending. Well I done

This novel is similar to the Bernie Gunther Series by Philip Kerr. It is not a gritty as his are but was a good read nonetheless. It is well researched and in period. There are few characters so it is easy to follow. I enjoyed it sufficiently to search for more books by this author. The narrator was easy to listen to and did not grate - as some do. Overall: an easy three stars.

Starts well but turns into a bit of a slog

A missed opportunity.... starts well, atmospheric (Berlin in the 1930s, how could it not be?) but then it spends 7 hours going nowhere before some excitement at the end and a very frustrating ending.

I'd suggest Fatherland or Munich by Robert Harris as an alternative.

The narrator struggles to keep on top of the accents. He never descends into 'Allo Allo territory but in dialogue scenes the characters' accents often merge into one another so you're not always sure who's speaking.

I kept at it as I was out on a long walk when listening to it, otherwise I would have given up.

MY BOOK AND AUTHOR OF THE YEAR

MIDNIGHT IN BERLIN – James MacManus
Reviewed by Eric J Drysdale – October 2018
This is my “book of the year” and James is my “author find of the year”, which I will note in my Christmas card to some 500 clients. In addition, from over 5,000 books that I have read it is only the fourth time I have immediately read the book a second time to savour the reading pleasure.
Anyone who is reasonably well read on Twentieth Century and WW2 history will appreciate the seamless integration of the real and fictional characters who people this wonderful novel.
As a writer you automatically assess the books you read in terms of plot, characterization, dialogue, craft and style, and, whilst you then know why you appreciate a particular novel, you also evaluate it with a more critical eye. Let us consider each of these:
PLOT: The novel is set in Berlin during 1938-1939 and centres on the conflict between Colonel Noel Macrae, the recently appointed Military Attache’ and Sir Neville Henderson, the actual British Ambassador to Berlin. This is set against the escalating crisis in Europe as Hitler flexes his muscles to take over Czechoslovakia, Poland and then Russia, while England, lead blindly by Neville Chamberlain, is determined to ignore every warning.
CHARACTERIZATION: The characters are skilfully drawn and I would defy anyone, who did not know from previous reading, to identify the real and fictional people in the drama.
DIALOGUE: The plot is driven forward by the exchanges between the many characters, friends and foes. These burgeoning or deteriorating relationships are subtly delineated with great economy and voices that ring true.
CRAFT AND STYLE: This is a finely crafted novel with the dramatic events unfolded against a carefully honed evocation of time and place. I applaud James for his depiction of Berlin in the various seasons in the last two years before the War. From the snow covered streets to the British Embassy and the German controlled bordello where the basest of human failings are exploited. The prose is evocative and economical and we are there with Noel Macrae as he strives to obtain confirmation of Hitler’s evil intent and find someone in power in London who will listen to his plaintive cries.
The audio edition is narrated perfectly by Peter Noble who captures the accents and nuances of the many characters. I felt the lovely Scot’s brogue of Noel Macrae rounded out a most admirably drawn character.
I could not imagine any discerning reader who was not impressed, touched and moved by this fine novel, which to me rates 100% in all departments. I would be delighted to receive comments from any fellow reader. My email is: ericjdrysdale@gmail.com
I would like to thank James for the care and attention to detail he has clearly taken in producing what to me is a text book example of quality writing at its best, and I wish him great success. Happy reading. Thank you, Eric.