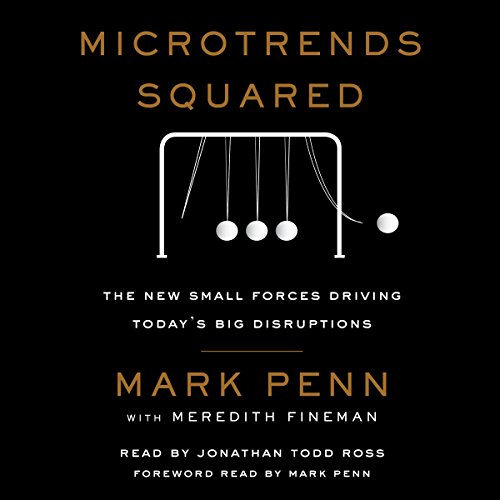 Ten years after his best seller Microtrends, Mark Penn identifies the next wave of trends reshaping the future of business, politics, and culture.

Mark Penn has boldly argued that the future is not shaped by society's broad forces but by quiet changes within narrow slices of the population. Ten years ago, he showed how the behavior of one small group can exert an outsized influence over the whole of America. His best-selling Microtrends highlighted dozens of tiny, counterintuitive trends that have since come to fruition, from the explosion of Internet dating to the recent split within the Republican Party.

Today, the world is in perplexing upheaval, and microtrends are more influential than ever. In this environment, Penn offers a necessary perspective.

Microtrends Squared makes sense of what is happening in the world today. Through 50 new microtrends, Penn illuminates the shifts that are coming in the next decade. He pinpoints the unseen hand behind new power relationships that have emerged - as fringe voters and reactionary politics have found their revival, as online influencers overshadow traditional media, and as the gig economy continues to invade new swathes of industry. He speaks to the next wave of developments coming in technology, social movements, and even dating.

Offering a clear vision of the future of business, politics, and culture, Microtrends Squared is a must-hear for innovators and entrepreneurs, political and business leaders, and for every curious listener looking to understand the wave of the future when it is just a ripple.

What listeners say about Microtrends Squared

it gives clear, holistic and sumple views on our world. Very easy to undetstand. nice intuition to readers.

Yes, It was very interesting and informative regarding today's culture.

This book gave a great insight into today's culture. It shows has society is changing and keeping up with current trends.

Which character – as performed by Jonathan Todd Ross and Mark Penn - foreword – was your favorite?

I liked the whole book it kept me interested and engrossed.

This a great book it will hold your interest.

If you love stats this is for you


I have read the 2008 book and when this came out I had to read it. A very enjoyable book taking you through the world micro trends in 2018. I was able to relate more to this book as we are living the events now. A very interesting selection of micro trends that touches parts of everyones life, this book made laugh in a lot of Chapters I was reading. Social micro trends broken down in a very simple everyday language for all those interested in in the subject.

Eye opening to the concepts you never hear about until they are mainstream. Will be on lookout for the next book.