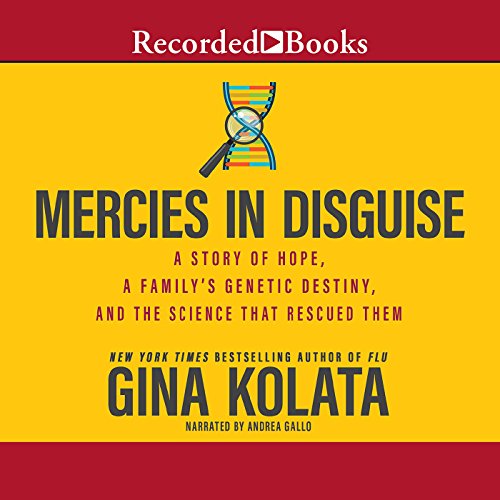 A Story of Hope, a Family's Genetic Destiny, and the Science That Rescued Them
By: Gina Kolata
Narrated by: Andrea Gallo
Length: 8 hrs and 31 mins
Categories: Biographies & Memoirs, Professionals & Academics
3.0 out of 5 stars 3.0 (1 rating)

New York Times science reporter Gina Kolata follows a family through genetic illness and one courageous daughter who decides her fate shall no longer be decided by a genetic flaw.

The phone rings; the doctor has the results. "Are you ready, Amanda?"

The two people Amanda Baxley loves the most had begged her not to be tested. But she had to find out. If your family carried a mutated gene that foretold brutal illness and you could find out if you inherited it, would you do it? Would you confront it, accepting whatever answer came? Or ignore it while you could?

In Mercies in Disguise, acclaimed New York Times reporter and best-selling author Gina Kolata tells the story of the Baxleys, an upstanding family in small-town South Carolina. Many of them were doctors, but still, they are struck down by an inscrutable illness. Finally they discover the cause of the disease after a remarkable sequence of providential events.

Meanwhile science, progressing for 50 years along a parallel track, handed the Baxleys a question - not a cure but a blood test that would reveal who had the gene for the disease. Science offered another dilemma - fertility specialists had created a way to spare the children.

A work of narrative nonfiction in the tradition of the The Immortal Life of Henrietta Lacks, Mercies in Disguise tells the story of a family that took matters into its own hands when medicine could not help. It's a story of a family dealing with unspeakable tragedy without being driven apart. It is the story of a young woman - Amanda Baxley - who faced the future, determined to find a way to disrupt her destiny.

What listeners say about Mercies in Disguise

Well written and read! I could listen to this again. I recommended this to ALL my friends and family. The book/story makes you feel as if you are a part of the journey this family endured.

Fascinating true story of a lovely SC family cursed with a rare and terrible genetic disease that manifests itself in middle age. Well told, kept my interest to the end. I was very anxious to hear the outcome of the screening tests that some of the family members sought and how they are trying to put an end to this tragic legacy.

I enjoy science-related books and am fond of medical "mysteries," but I found this book exceedingly slow in developing. The characters weren't as fleshed out, but at the same time I was not interested in the aside that a Kuru researcher was--much later in his career-- jailed for what I read between the lines as paedophilia. I increased the speed and managed to finish 25% of the book. At this point I'm not interested or invested in finding out what the mystery disease is.