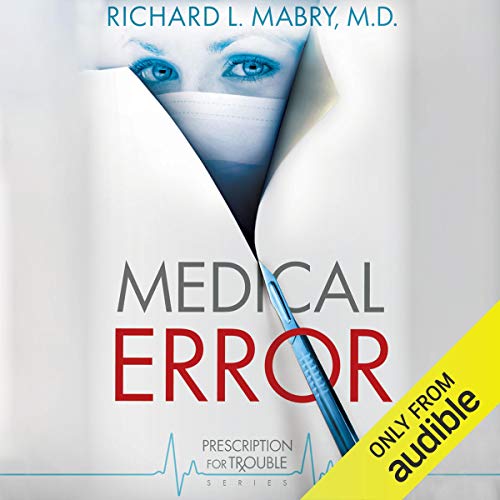 Dr. Anna McIntyre's life was going along just fine until someone else started living it. Her patient died because of an identity mix-up, her medical career is in jeopardy because of forged prescriptions, and her credit is in ruins. She thought things couldn't get worse, but that was before she opened the envelope and saw a positive HIV test with her name on it.

Her allies are two men who are also competing for her affection. Dr. Nick Valentine is a cynic who carries a load of guilt. Attorney Ross Donovan is a recovering alcoholic. The deeper Anna digs to discover who's behind the identity thefts, the higher the stakes. Finally, when her life is on the line, Anna finds that her determination to clear her name might have been a prescription for trouble.

What listeners say about Medical Error

Great story, interesting, real, factually correct, from a medical standpoint I found it engaging and it's great to see faith and belief in God really come across in a book!
Recommend to everyone

I enjoyed this book, the mystery kept me wanting to know more !!The narrator was excellent.

What did you love best about Medical Error?

Great narration. I'm glad the same narrator is assigned to all 4 books. Can't wait to listen to the last two books!

Who was the most memorable character of Medical Error and why?

It was such a complex story that I felt Anna's confusion, and I would never have guessed the bad guy. The narrator-ship was excellent too. And it is awesome to listen to books which include Jesus as Lord.

Kate did a fantastic job reading the book. The author was satisfactory. The plot was very good. It was well written. My only criticism was that she tended to try to explain basic concepts. I felt like she was targeting a young teen. Basic computer functions and basic ideas were explained. I feel like this book targeted ladies but labored to explain ideas that are familiar to most middle class women. Overall, the book was a solid read.

What made the experience of listening to Medical Error the most enjoyable?

The story and the reader's expression drew me right in. I felt as if I were there.

What other book might you compare Medical Error to and why?

I've read all of Dr. Mabry's books before this one, and they stand alone in drama, medical background (go figure), and setting.

Ms. Udall spoke clearly, added emphasis were appropriate, and even used slight accents or variations for each character. This is important, because the written text of Dr. Mabry's books has limited use of "he said," "she said." The narrator has to imply the next speaker.

This is a product I would recommend to anyone.