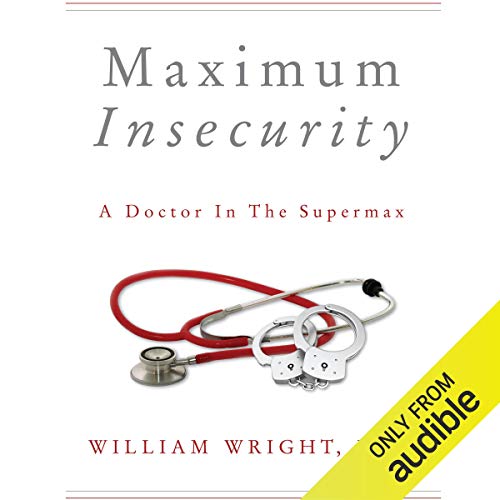 After three decades as a successful ear surgeon, William Wright, MD is bored beyond belief. He dabbles with retirement, but finds idleness infuriating. He has to do something. Then he sees an ad for a doctor’s position from the Colorado Department of Corrections at a supermax prison. Now that, he thinks, would be different. His wife has some thoughts on the matter too. She thinks her husband just lost his mind and is on a collision course with a prison shiv.

After his first day on the job, he wonders if she wasn’t onto something. His first patient is an arrogant, callous youth convicted of five cold-blooded murders. Dr. Wright has to steel himself not to bolt.

Nothing prepares a doctor for life at the Colorado State Penitentiary. He quickly discovers treating maximum security convicts is like treating recalcitrant murderous four-year-olds. Always willing to threaten their doctors with bodily harm, they are more interested in scamming drugs than treatment.

Told with self-depreciating humor and scathing wit, Maximum Insecurity describes Dr. Wright’s adventures practicing medicine in a supermax correctional facility without, he’s glad to say, getting killed even once.

What listeners say about Maximum Insecurity

OK but not brilliant!

The concept was good but did not quite deliver for me! It should of been better, couple of area's were good but to me it lacked depth - i wasn't expecting a serious study as I think it was more of a light hearted story but it wasn't funny enough to be totally a comedy book but wasn't serious enough to be a un-biased look at the prison service.

Would you listen to another book narrated by Eric Martin?

yes - I liked his voice and wasn't irritating or too much

possibly if it had more laughs!

I used to work in medical corrections so I could totally relate to the author's experience. My only complaint is that he repeats things quite often. It didn't distract from the story as a whole, but didn't add to it and was annoying to listen to the same lines. Other than that the book was entertaining, informative, and engaging.

It's one of the most entertaining audible books-ever!
Funny, true to life, narration and dialogue at its best especially the inmates.
You are noble, Dr. Wright !

Dr. Wright is a completely likable person, and he is noticeably talented. His journey into the correctional system is very honest and enlightening, and his book is superbly written. He initially goes into the supermax prison with a worry for his life, but after the first day, he realizes that the majority of inmates are basically a bunch of whiny babies. The book is really interesting, and his interactions with the various inmates are really comical, but he also speaks quite seriously about his observations on the flaws of the correctional system.

Eric Martin’s narration is absolutely perfect. It feels like Dr. Wright is in the room with you telling his stories, and he makes all the different inmates come to life. He truly has a talent for narration! I can’t even imagine myself ever reading a physical copy of this book because his performance is altogether outstanding.

There are few chapters in this book that make me laugh out loud every single time, and I often return to this title when I am between audiobooks. I highly recommend Maximum Insecurity! If the summary of this book has peaked your interest you should definitely pick it up!

Where does Maximum Insecurity rank among all the audiobooks you’ve listened to so far?

What was one of the most memorable moments of Maximum Insecurity?

the honesty of the doctor, about really goes on in the Maximum jail

What does Eric Martin bring to the story that you wouldn’t experience if you just read the book?

the dry sense of humor

the author did a great job telling about his change in careers without bragging - he tells what it like to work for a government agency, without being unduly critical

What a great book! Dr. Wright is funny, he shares his interesting experience working within the prison as an MD. A paramedic, he and I alike have had similar experiences working in Correctional Medicine.

Bad in so many ways

The author of this book is an arrogant jerk. The entire book is focused on criticizing his coworkers and boasting about how he is superior to everyone. Being an RN, I took major offense to his comment that nurses aren’t supposed to think, they are simply supposed to follow doctors’ orders. If he is ever faced with a major medical issue that requires hospitalization, he better damn well pray he has nurses that can think and save his life if needed. I would love to know the real reason he left behind the prestige of being a surgeon and the high salary that accompanies it. No one in their right mind would give that up for the low rank and salary of a prison doctor without being forced into it.

Aside from my disdain for the author’s personality and disrespect towards others, it’s simply not a good book. It seems like random chapters were written over time and then assembled haphazardly at the last minute. There is no flow or order to the book and it contains a lot of repetition...the same stories in multiple chapters. The other thing I found odd is that he never talks about the most prevalent health issue among the prison population, which is mental illness.

I’ve never taken the time to write a book review before, but felt compelled to with this one. I don’t understand why others have rated it so high and I definitely do not recommend wasting your time and money on this.

Listening to this book was like a long hike up hill with a large pack strapped to the back. The narrator is not to blame here any more than the hill is to blame.

The author seemed at times to be burned out, bitter, and callous. At other times, he seemed to have a dry sense of humor and a compassionate heart.

There is a compelling story here, but it is often marred by jarring judgements about offenders, administrators, and institutions.

I stopped this book about 2 hours in and debated about returning it for a few days. It finally hooked me once I decided to view the authors seeming rough handling of some topics as attempts at dry humor.

the author is a real piece of work. arrogant, self-aggrandizing and all-around jerk. everyone around him is stupid, including his coworkers, convicts, corrections officers, nurses and other doctors. apparently nobody else is allowed to have a bad attitude except for him. the narrator was trying to do his best Jack Nicholson impression it seemed. I had to turn it up to 1.5 for it to be normal speaking pace. I thought it would be full of funny anecdotes but it's just a guy that's full of himself. give it a miss unless you really want to dislike somebody, that would be the author not the convicts.

I enjoy medical narratives- this doctor’s extreme dislike for his patients and complete disdain for them was surprising and disturbing. It’s hours of mocking stories, read only if that appeals to you.

Would you consider the audio edition of Maximum Insecurity to be better than the print version?

Possibly. I didn't read the print version. The audio version is excellent, with terrific narration by Eric Martin.

Since this is about real people and not literary characters, I won't be picking any favorites.

Not a scene-based work, either. Dr. Wright tells plenty of fascinating, sometimes disturbing stories, but they are not scenes.

Medicine in the Supermax

Prison life manages to simultaneously attract our interest and repel our sympathies. Dr. Wright dove in to that system and learned quickly--both learning and speed of learning were essential--how to handle his daily roster of dangerous, manipulative patients. He shares with the reader/listener a wide variety of his experiences with the criminal clientele and with the prison staff and administration. Dr. Wright is an open, honest author with a dry sense of humor. He understands the crafty nature of most of the prisoners and avoids playing co-dependent to their various deficiencies. But Dr. Wright also has compassion for these people, and strives to help them whenever possible. I enjoyed this book so much that I snapped up its sequel, Jailhouse Doc. Serving as a jail doc turned out to be quite a different experience for Dr. Wright. I highly recommend both books.