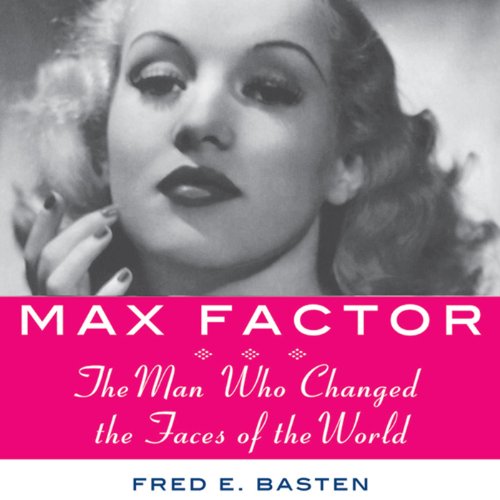 Fred Basten, many of whose books have featured Hollywood and the entertainment industry, explores the biography of the "father of modern makeup". Born in Poland, Max Factor worked on first Russian and then Hollywood royalty. With the friendliness and openness of a favorite cosmetician, Samantha Worthen reads the story of a cosmetics innovator who created the looks of Romanov women as well as stars such as Pola Negri, Katharine Hepburn, Rita Hayworth, and Bette Davis. Additionally, he proved himself a great salesman and only-in-America entrepreneur by bringing that glamour to the women of Main Street.

Nice women never wore makeup. Even the word was taboo in polite society—until Max Factor entered the scene. Born in Poland in 1877, Factor worked as a beautician for the Russian royal family, the Romanovs. In 1904, he fled to America, where he opened a cosmetics store in Los Angeles. Creating makeup originally for silent films, then the talkies, and, ultimately, color motion pictures, Factor designed looks for Katharine Hepburn, Rita Hayworth, Bette Davis, and countless other beauties of the day. Soon women everywhere wanted to look like their favorite glamorous stars, and Factor was there to help, bringing his innovative cosmetics to the general public.

He revolutionized the world of beauty by producing many firsts: false eyelashes, lip gloss, foundation, eye shadow, the eyebrow pencil, concealer, wand-applicator mascara, and water-resistant makeup. A true innovator, he also introduced the concept of color harmony and the celebrity-endorsed cosmetics advertising that forms the glamorous backbone of the modern industry. Max Factor was the father of modern makeup. This is his extraordinary story.

What listeners say about Max Factor

Interesting, yet forgettable in all the good ways

Who would you have cast as narrator instead of Samantha Worthen?

I would cast almost any human over Samantha Worthen, who sounds like a robot that doesn't understand how a sentence is supposed to be read for it to flow. Strange and unnecessary pauses, almost as if words were recorded independently of each other then strung together to make this recording. While this does improve over each individual chapter, the beginning of the next chapter is just as bad as the last