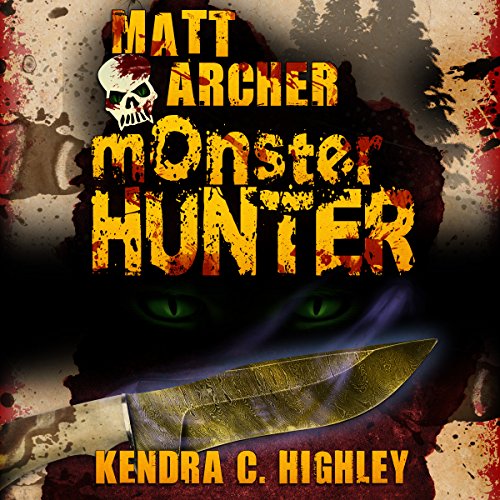 Fourteen-year-old Matt Archer spends his days studying Algebra, hanging out with his best friend, and crushing on the Goddess of Greenhill High, Ella Mitchell. To be honest, he thinks his life is pretty lame until he discovers something terrifying on a weekend camping trip at the local state park.

Monsters are real. And living in his backyard.

But that's not the half of it. After Matt is forced to kill a strange creature to save his uncle, he finds out that the weird knife he took from his uncle's bag has a secret, one that will change Matt's life. The knife was designed with one purpose: to hunt monsters. And it's chosen Matt as its wielder.

Now Matt's part of a world he didn't know existed, working with a covert military unit dedicated to eliminating walking nightmares. Faced with a prophecy about a looming dark war, Matt soon realizes his upcoming Algebra test is the least of his worries.

His new double life leaves Matt wondering which is tougher: hunting monsters or asking Ella Mitchell for a date?

What listeners say about Matt Archer

Was a gripping listen on audiobook for my 8 year old. Unfortunately can't find follow up books on audio.

Not a bad story really well thought out, be nice to understand where the monsters came from but suppose that's what book 2 is for.

I'm not exactly the target demographic, being a 50-year old mum of 3, but my 14 year old son and I listened to this at the same time and we both really enjoyed it. We discussed the story etc together. It was simple, unadulterated fun.

Problem is: where is the rest of the series? Audible, can you please get on to this.

I am now reading the second one on my Kindle, the first time I've ventured into a print book in over a year, as I haven't much spare time. But I just couldn't wait to find out what happens next.

PS: a great tip about the peanut butter sandwiches. Which I am now enforcing, much to my son's disgruntlement!

Great book for teens or adults!

Matt Archer Monster Hunter by Kendra Highley and narrated by Chris Snelgrove is about a 14 year old boy that not only has to worry about school, homework, girls, bullies, and his Uncle being deployed again, now he has to worry about monsters in his home state. Seems supernatural knife chose HIM to use it's power to fight monsters. So now he is working with the government, behind his mom's back, fighting monsters with crack fighters. Some of those fighters also have supernatural knives. It's a fun story that kept me interested. I do want to continue with this series.

Interesting story, could use a little more information

Well told and narrated but too short. This one came out in 2014? When will we get the next book?!

A good story to begin with in print. Add to that spot on voice narration you have a winner. I can't figure out why more people haven't listened to this. I hope another positive review will inspire the publisher to take a risk and put the rest of the series on audio!

I love monster hunting books and it's so refreshing to find one written for a younger audience. I have a 13 year old that would love the MHI series, for example, but the language is enough to stop me from recommending it to her. If you have a younger teen that loves Buffy or Supernatural or other monster-themed shows, and they are a reader, this a good book. Minimal language, minimal sex, violence that's limited to the monsters. It's a good bridge for the genre.

I really enjoyed the series. I hope she will have the other books done in this format as well.

Give us the rest of this awesomely amazing series!

I guess I have to read the entire series again while I wait for the audiobooks to come out!

love the book have heard it several times now. have only read the other books. would very much like to hear the others in audiobook