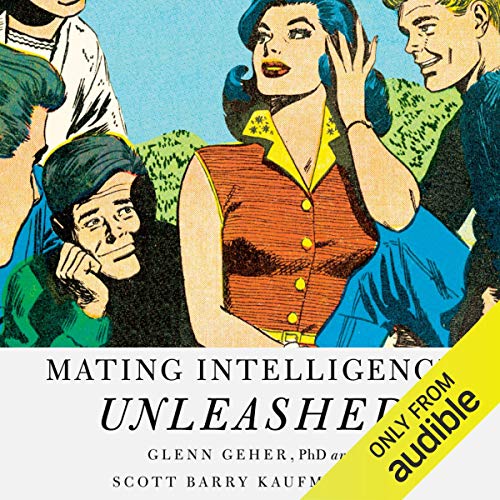 Psychologists often paint a picture of human mating as visceral, instinctual. But that's not the whole story. In courtship and display, sexual competition and rivalry, we are also guided by what Glenn Geher and Scott Barry Kaufman call Mating Intelligence - a range of mental abilities that have evolved to help us find the right partner. Mating Intelligence is at work in our efforts to form, maintain, and end relationships. It guides us in flirtation, foreplay, copulation, finding and choosing a mate, and many other behaviors.

In Mating Intelligence Unleashed, psychologists Geher and Kaufman take listeners on a fascinating tour of the crossroads of mating and intelligence, drawing on cutting-edge research on evolutionary psychology, intelligence, creativity, personality, social psychology, neuroscience, and more. The authors show that despite what you may read in the latest issue of Maxim, Playboy, Vogue, or GQ, physical attractiveness isn't the whole story. Human mating draws on a range of mental skills and attributes - from the creative use of pick-up lines, to displays of charisma, intelligence, humor, personality, and compassion. Along the way, the authors shed new light on age-old questions, such as: What role does personality play in mating? Which traits are attractive - and which traits repulse? How do people really choose mates? How do men and women deceive each other? How important is emotional intelligence? Why do people create art - and does it have anything to do with sex? Do nice guys really finish last?

Since Glenn Geher coined the term Mating Intelligence in 2006, it has drawn a great deal of media attention, ranging from a Psychology Today cover story to articles in the New Scientist, The Washington Times, Huffington Post, and elsewhere. Now, in Mating Intelligence Unleashed, listeners will have the first full account of this revolutionary new approach to dating, mating, and love.

The book has a lot of knowledge about mating in the human domain but the way this information is presented may not suite the audio book format that well. I think the content itself is great and ended up buying the paper version.

If you are looking for scientific, real knowledge, about mating, this is one of your must-have books.

One of the best books I've listen to for a while. Excellently put together. This covers almost everything you need to know about fitting evolutionary psychology into modern day thinking. Highly recommended listening.

Would you listen to Mating Intelligence Unleashed again? Why?

There is so much information that needs to be processed that I often find myself listening to passages two and three times because my mind seems to ponder words just spoken.

What other book might you compare Mating Intelligence Unleashed to and why?

I compare this book to Dr. Geoffrey Miller's "The Mating Mind," Dr. Helen Fisher's, "Why Him, Why Her?" and Dr. David Buss' "Why Women Have Sex."

It's difficult to choose just one section, as they all have merit.

I am a dating expert and I've always been passionately interested in love and attraction ever since my first erection. I've read or listened to nearly all the major treatises on evolutionary psychology and mating intelligence, and it seems the more I learn the more I realize I don't know.

Although I pride myself on my masculinity and controlling my emotions, this was only one of two non-fiction books that nearly brought me to tears because of it's insightful peek behind the curtain that makes us human.

If only Dr.'s Geher and Kaufman could find the right person to help them translate this incredibly valuable treasure trove of knowledge so it can be made useful and available to the masses, they could become the Steve Jobs and Steve Wozniak's of the dating world!

Finally, someone wrote a science book about dating!

This book answers many important questions such as: why women go for assholes, why does the friend zone exist, and what's the best strategy for a nice guy who wants to succeed with women?

This is one of the most important books I've ever read, and I've read over 230 books on Audible alone!

I highly recommend this book for everyone!

Tedious with the gems buried deep within

Reads like a dissertation with some jokes thrown in. Was a real slog to finish this. Some good insights, but they're buried very very deep and difficult to access mentally unless you can get through the dense over-wrought language. For a much better listen on the same topic, "Love Factually" was far better and more accessible.

This book reads like a 300 level psychology text. Almost too much info too fast, so if it's easy comprehension and light material you are interested in this may not be your book. However, wow what a treasure if info backed by solid research and scholary references.

Great Information for everyone

it's simple just try and learn something you never knew. All i have to say is just let the information fall into your head. This is all very realistic to this generation from 16 to 25 . Its just missing the prime years such as 26 to 54 and so on .