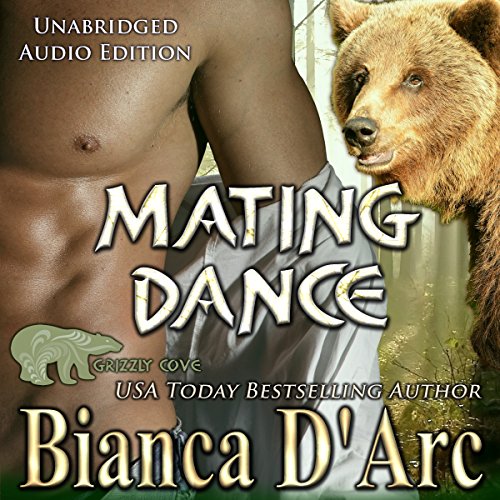 By: Bianca D'Arc
Narrated by: Rhiannon Angell
Try for £0.00

Tom, Grizzly Cove's only lawyer, is also a badass grizzly bear, but he's met his match in Ashley, the woman he just can't get out of his mind. She's got a dark secret that only he knows. When ugliness from her past tracks her to her new home, can Tom protect the woman he is fast coming to believe is his mate? And more, will she allow it? Or will she run from him, and the secrets of Grizzly Cove, forever?

What listeners say about Mating Dance

Where does Mating Dance rank among all the audiobooks you’ve listened to so far?

It was cute, tame and short. Not much drama in this book either. Don't get me wrong, I didn't hate this book, I liked it - it was just a little too tame for my taste.

Gus the seagull - I guess because there's a story/mystery there that wasn't revealed.

I thought she did a very good job, upbeat and appealing.

I guess these stories tend to appeal to younger girls (late teens, maybe). However, I will try to catch the next installment (book) because I think it will probably be the third sister, Tina's story. Again, have a little more drama or suspense in the story. A tad more danger I guess I am saying.

What made the experience of listening to Mating Dance the most enjoyable?

I am really enjoying the Bears of Grizzly Cove and look forward to more. The battle between good and evil is presented in an unique way. Bianca's stories are always a wonderful treat.

If you could sum up Mating Dance in three words, what would they be?

What was one of the most memorable moments of Mating Dance?

Their first night together.

No, the book was to short for a film, The book is a novella.

I wish it was longer, it is the same for other books of the series.

Mating Dance is a wonderful whimsical romance between a sexy, respectful bear shifter and a human woman. Enjoyed the chemistry between the townsfolk, the sisters and the new couple.

I would have added some action. The story much like book 1 needed something to keep you interested. There just not enough of "meat" to keep your attention. This story line has great potential that is not being capitalized on by the author.

Would you ever listen to anything by Bianca D'Arc again?

Yes. She has talent that is unrealized.

Would you listen to another book narrated by Rhiannon Angell?

Yes. She has a great bedtime story voice.

Great story with untapped potential. Beef it up, bring some excitement, some passion, some action and you'll have a hit.