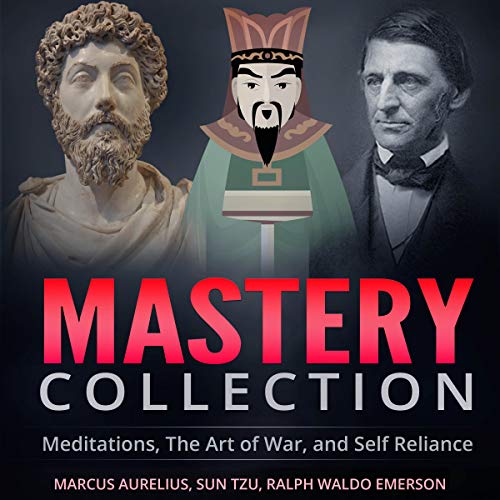 Mastery Collection: Meditations, The Art of War, and Self Reliance

Meditations, The Art of War, and Self Reliance are three famous books that will help you achieve mastery in life.

Meditations is a series of personal writings by Marcus Aurelius, Roman Emperor from 161 to 180 AD, recording his private notes to himself and ideas on Stoic philosophy. Marcus Aurelius wrote the 12 books of the Meditations as a source for his own guidance and self-improvement.

The Art of War is an ancient Chinese military treatise written by strategist Sun Tzu. Each chapter is devoted to a distinct aspect of warfare and how that applies to military strategy and tactics. The Art of War remains the most influential strategy text in East Asian warfare. It has a profound influence on both Eastern and Western military thinking, business tactics, legal strategy and beyond.

Self Reliance is an essay written in 1841 by American transcendentalist philosopher and essayist Ralph Waldo Emerson. It contains the most thorough statement of one of Emerson's recurrent themes: the need for each individual to avoid conformity and false consistency, and follow their own instincts and ideas. It is the source of one of Emerson's most famous quotations: "A foolish consistency is the hobgoblin of little minds, adored by little statesmen and philosophers and divines." This essay is an analysis into the nature of the “aboriginal self on which a universal reliance may be grounded.”

What listeners say about Mastery Collection: Meditations, The Art of War, and Self Reliance

I enjoyed hearing the narrator's voice, for the most part. It was not abrasive or distracting. He had no obvious difficulty in enduring the length of these volumes, nor did he pronounce very many words differently to how I would.

My criticism is in the lack of emphasis or variability. I understand a reverential tone being used while reciting these highly acclaimed and very important works of literature, but the delivery of EVERY sentence as a golden wisdom boulder of inestimable value is oddly tiresome yet soothing. This was fairly difficult to listen to as a source of ancient insights, but not at all intrusive as an ambient background track to a lengthy road trip.

I liked it overall a good listen . recommended it to a few friends .