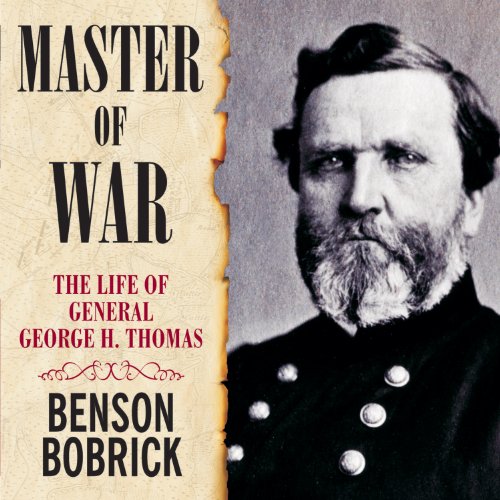 By: Benson Bobrick
Narrated by: Norman Dietz
Try for £0.00

In this revelatory, dynamic biography, Benson Bobrick, profiles George H. Thomas, arguing that he was the greatest and most successful general of the Civil War. Because Thomas didn't live to write his memoirs, his reputation has been largely shaped by others, most notably Ulysses S. Grant and William Tecumseh Sherman, two generals with whom Thomas served and who diminished his successes in their favor in their own memoirs.

Born in Virginia, Thomas survived Nat Turner's rebellion as a boy, then studied at West Point, where Sherman was a classmate. Thomas distinguished himself in the Mexican War and then returned to West Point as an instructor. When the Civil War broke out, Thomas remained loyal to the Union, unlike fellow Virginia-born officer Robert E. Lee (among others). He compiled an outstanding record as an officer in battles at Mill Springs, Perryville, and Stones River. At the Battle of Chickamauga, Thomas, at the time a corps commander, held the center of the Union line under a ferocious assault, then rallied the troops on Horseshoe Ridge to prevent a Confederate rout of the Union army. His extraordinary performance there earned him the nickname "The Rock of Chickamauga."Promoted to command of the Army of the Cumberland, he led his army in a stunning Union victory at the Battle of Chattanooga. Thomas supported Sherman on his march through Georgia in the spring of 1864, winning an important victory at the Battle of Peachtree Creek. As Sherman continued on his March to the Sea, Thomas returned to Tennessee and in the battle of Nashville destroyed the army of Confederate general John Bell Hood. It was one of the most decisive victories of the war, and Thomas won it even as Grant was on his way to remove Thomas from his command.

What listeners say about Master of War

This book is not about the life of Thomas (as the cover says). It should not be considered a biography. It simply is a theory of how Grant and Sherman defamed and maligned Thomas in order to boost their own careers. Reading this I was reminded of elementary school kids arguing about who’s older brother was better at baseball. Here is one sentence to describe what the book is about using similar intellect and tone as the author: Grant, Sherman bad – Thomas good.

I would have given the reader three and a half stars if I had such a choice - he is not bad.

I really wanted to like this book. Thomas is one of my favorite Civil War figures, and once downloaded I eagerly started reading it - but what a disappointment!

Accurate and detailed account of one of our country's best, albeit unsung, military leaders. Add a star if you are a civil war buff or military strategist, helpful to know Civil War generals before reading. Entertaining listen as if you were there, one that meshes human nature and politics within the career military, something that is still prevalent today.

I love anything related to the Civil War. This was a very interesting read. I did not know about Gen. Thomas, unfortunately school spends more time teaching us about traitors like Robert E. Lee instead of the generals that kept the country together.

A True Hero in All Respects

Story was very enjoyable. General Thomas was truly a major hero and truly a tremendous value to the Union Army. My only issue I take exception to is the true dislike Grant had for Thomas. It seems like the writer went out of his way to prove this point by talking so negatively about Grant and making Thomas out to be some God like creature of perfect stature in every conceivable way. Surely they both had some good and bad points in each of them. Don't tear down one to show the other's attributes. Otherwise I thought it was well written and narrated. I would recommend this to book to others for sure.

Best book of the civil war in the west I have ever read. Gen. Thomas will never be forgotten and is in fact the best Civil war general over anyone else Both sides included.

Injustice made right. Far too long has it been for this general been denied truth.

This biography is an eye-opener, and a mind-opener.

By any standard, he is among the top generals in the Civil War. Perhaps the greatest general.

He never lost a movement or a battle. His defence at Chickamauga is important in military history. His tactics at Nashville, stunning!

If we compare his loss ratios (number of troops killed, wounded, missing) to his numbers deployed, his star far outshines all other Civil War generals.

Great book about a forgotten hero

This was a well written and well referenced book about the greatest civil war general. It relied heavily on primary references such as official dispatches and telegrams. It was hard to despise the men who worked to undermine and take credit for General Thomas' military success and legacy.

The story of a soldier with undeniable integrity and mastery of the art of war.

George Thomas was a brilliant, honest and tenacious military leader. This book does it’s very best to defend and explain the considerable determination and proficiency General Thomas brought to his duties and the success of his actions and his dedication. Very well done. A singular hero of mine and a stalwart man who served his nation faithfully until his final day.

if you are a civilwar buff get it!!

in this book you will meet a man that if i could measure up to just 10% of his character i would be happy...be prepared to find out with documentation just how shallow and incompetant sherman and grant were....not taking grant off a fifty dollar bill will be an injustice.