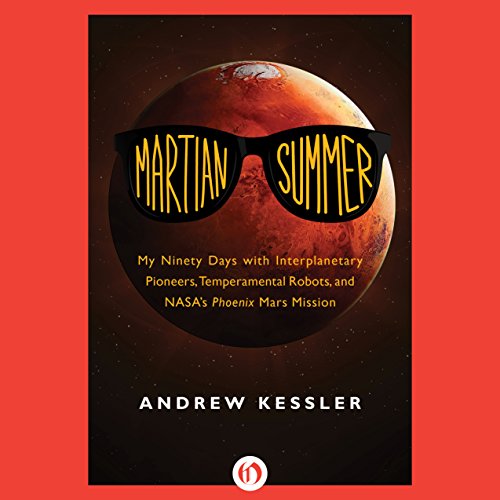 Get up close and personal with science as Andrew Kessler narrates his hilarious journey inside NASA’s Phoenix Mars mission - a historic enterprise manned by a motley crew of rocket scientists. The Phoenix Mars mission was the first man-made probe ever sent to the Martian arctic. Its purpose was to find out how climate change could turn a warm, wet planet (read: Earth) into a cold, barren desert (read: Mars). Along the way, Phoenix discovered a giant frozen ocean trapped beneath the north pole of Mars, exotic food for aliens, and liquid water, and laid the foundation for NASA’s current exploration of Mars using the Curiosity rover. This is not science fiction. It’s fact. And for the luckiest fanboy in fandom, it was the best vacation ever. Andrew Kessler spent the summer of 2008 in NASA’s mission control with 130 of the world’s best planetary scientists and engineers as they carried out this ambitious operation. He came back with a story of human drama about modern-day pioneers battling NASA politics, temperamental robots, and the bizarre world of daily life in mission control.

What listeners say about Martian Summer

Kessler is the co-producer of a Discovery Channel feature on the quest for life on Mars. He was chosen to chronicle the 2008 Phoenix Lander’s ninety days around the red plant’s North Pole, with daily access to the earth-side scientist running the experiments. The mission was to search for evidence of water and organic chemistry, two pre-requisites for determining whether life exists on Mars. The Mission head Peter Smith thought a popular account of the discoveries and the scientist behind them would help inspire a new generation to enter space science.

The author provides some fascinating glimpses of the real work of a space mission. Keeler covers the problems with the robot arm and the onboard analytical equipment and how it was solved and the discovery of liquid water on the surface of Mars. Unfortunately only someone who is already a space fan would find the book interesting. The less than stellar treatment of the story leaves much to be desired if the goal was to attract young people into a space career. I did not care for the flippant style the book was written in, I felt the topic much too serious for that attitude to be acceptable. For those who are space science fans this is an interesting story. Adam Schneemann did a good job narrating the book.

Interesting and quite detaied, but the narrator made the story into a long, tedious listen.

really wish they had pick somebody with a better narration voice but someone definitely needs to be able to pronounce important figures' names, like Burt Rutan, or simple words like Adobe correctly. Lack of doing so really detract from the importance of this story and how it really needs to be told. Very glad story was written

it had great humor and really explained the people and their persona so you really gotta feel for the scientist that worked on Phoenix.