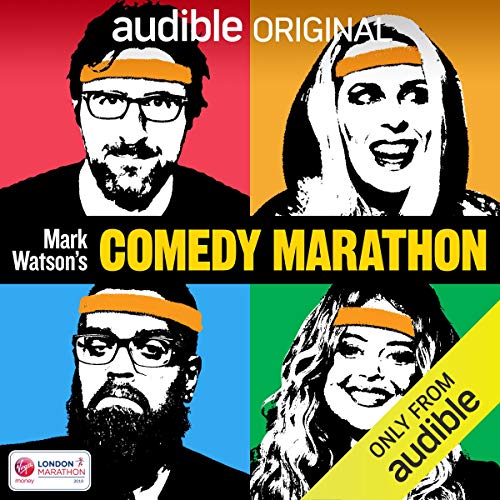 Watson has brought together an amazing amount of comedy talent and given them astonishingly good monologues. I wasn’t sure what to expect, but after listening to the first episode I went straight on to the next six! Really, really funny and the little twists that come in later episodes are excellent!

Part "coverage" of the London Marathon, part eavesdropping on conversations and internal monologues of the runners, spectators, even the people handing out the water bottles – I'm really enjoying this series so far.

Episode one has a runner upset at how few sponsors he's got, and an aunt struggling to cope with a devious niece waiting for her mum to run past.

Brilliantly performed by the cast, and wonderfully written. Touching, funny, relatable and surreal – well worth a listen.

Really badly written, didn't crack a smile after 3 episodes. Gave up. Glad I didn't have to pay!

first episode was pretty good, second was even better - thought the Derren Brown bit was exceptional, really made me chuckle!

Hugely talented cast and a really fun premise - realistically relatable in parts alongside some more surreal characters, that hang together thanks to the clever writing. Mark is excellent at creating fully realised individuals within minutes and it had a good balance of clever imagery and sound to evoke the spirit of the race alongside some big laughs from the narrative (episode 5 was my stand out favourite)

Picks up pace as it goes along, like a real marathon, and a really strong finish - even if it doesn’t inspire me to run a real one.

This is a brilliant series of comedy episodes on an ambitious scale, typical of Mark Watson’s skilful writing and amazing ability to invent extraordinary stories. It’s laugh-out-loud funny with a brilliant and varied cast. The production values are excellent too. The intertwining stories and genuinely hilarious characters make it a really rewarding listen. I can’t recommend this highly enough.

Mark Watson is a comic genius. This is among his best work. Hilarious, sharp, tender and in places quite moving. What a gift this series is. A must for all runners.

Top work from Mark Watson! A fantastic cast, incredible writing and funny, thoughtful stories - I could have happily listened to all six hours in one go.

Great idea, well executed. An absolute joy! Listened to it in my car, whilst *pretending* I was fit enough to run a marathon.

I now want to run a marathon just to see all my amusing flaws and to potentially hear what my shoes think.

Is this supposed to be funny?

This is an even remotely amusing it’s more just stupid if you ever wanted to dumb down your brain just listen to this crap! It’s a sad waste of time. what a waste!