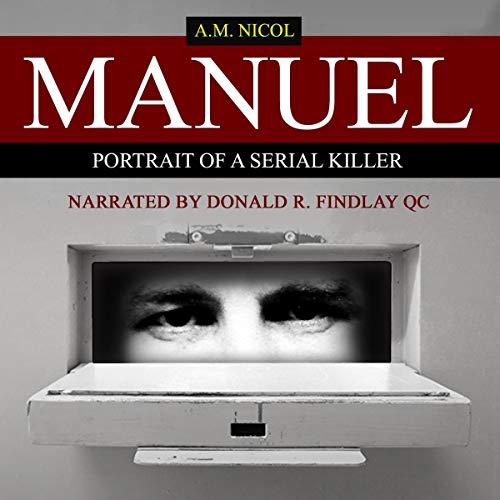 Manuel: Portrait of a Serial Killer

The true story behind the notorious serial killer Peter Manuel, recently dramatized in the major ITV drama In Plain Sight. In a two-year killing spree, Peter Manuel terrorized a city. As the people of Glasgow and Lanarkshire held their breath and anxiously awaited news, Peter Manuel killed Anne Kneilands, Marion Watt, her daughter Vivienne and her sister Margaret, Isabelle Cooke and the Smart family - all in cold blood. But what drove him to commit such barbaric crimes? And could the police have caught him sooner?

Manuel: Portrait of a Serial Killer tells the full story from his birth in the USA and his love of gangster movies to his life of crime that would ultimately end on the gallows after one of the most sensational trials in legal history. Revealing new facts about the case and the myths that surround it, this is the definitive account of one of the most notorious criminals in history - Peter Manuel, serial killer.

Donald R Findlay QC has spent over 40 years defending accused in Scotland's High Court. There can be few - if any - worldwide who have represented more persons accused of murder. In the preface, Donald explains what what led him to his lifelong fascination with criminal law and goes on to narrate the egregious crimes of the notorious Peter Thomas Anthony Manuel who was hanged at HM Prison Barlinnie, Glasgow, on 11 July 1958. Donald brings his unique gravitas to the tragic story of the infamous killer's family background, his inability to cope with an itinerant upbringing, the early signs of psychopathic personality disorder, and his increasingly serious court appearances in Scotland culminating in his execution

What listeners say about Manuel: Portrait of a Serial Killer

If you want to understand the mind of a psychopath, this is the book to listen to. Manuel was a true psychopath without feelings or remorse, the psychopathic traits being borne in childhood and lasting until his dying day. His one weak point was the love of his Mother and Father and it was the arrest of his Father which ultimately led to Manuel being convicted of the heinous crimes for which he was hung. The narrator is excellent and it is fitting that he speaks with a calm, almost mesmerising Scottish accent. Well worth buying.