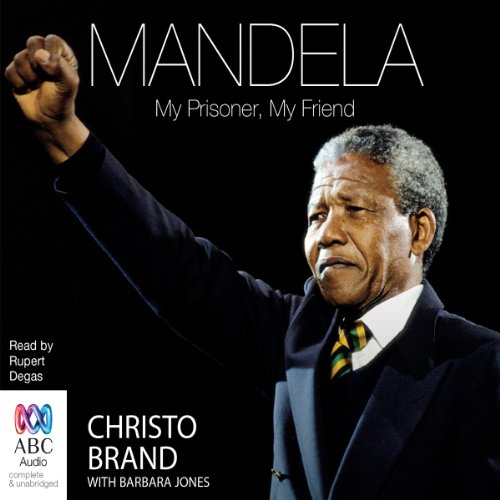 My Prisoner, My Friend
By: Christo Brand
Narrated by: Rupert Degas
Length: 7 hrs and 23 mins
Categories: History, Africa
5 out of 5 stars 4.8 (8 ratings)

Christo Brand was an 18-year-old recruit to the South African prison service when he was sent to work at the Robben Island prison. He was assigned to guard Nelson Mandela, who he was told was a dangerous terrorist. Over time, he became friendly with Mandela, even helping his wife Winnie bring in their grandchild for Mandela to hold for the first time.

The bond of trust between the two men extended beyond Mandela's prison years. As President of South Africa, he called for Christo and gave him a job in the archives department in Parliament. A few weeks before his death, Mandela made another call, to say goodbye.

Mandela: My Prisoner, My Friend is the story of Mandela's life in Christo Brand's own words, and of a powerful friendship forming in the most unlikely of places.

What listeners say about Mandela

Well written and well read. I would recommend to anyone who has an interest in Mandela's life. Told from a different perspective; gives you more insight into Mandela's true personality and humility throughout his time in prison. The narrator reads well and it adds a little realism having a South African narrating.

intense and emotional throughout. pity not all world leaders are like mandela. his character is incredible. narrator was great and book was well structured.

This may be the best book I’ve read in 45 years! AMAZING! I never wanted to stop listening because I was able to feel a close love for Nelson Mandela through this story! I learned a lot too. I’ll listen to this audio over & over with much felt love & joy!

It was excellent!! The reading was excellent as well as the content. A wonderful human Mandela was his inner honesty & his eagerness for education was so very fine. Such a great example for us all!!!

This is an amazing true account, written by a great man, about his time with another great man. I met Christo Brand a few times and he is a genuinely kind and giving human being and had tremendous respect for Nelson Mandela. This book is awesome!

Moved from dark to light...Enlightened!

My cousin Marilyn wanted to give me the book...I said i would listen to it on audible. i now wish i had the book (and its photos) for my collection. maybe I can still get this masterpiece.

Fascinating story of the life and times of Mandela .. Very personable and informative ... Of a greT man and his times