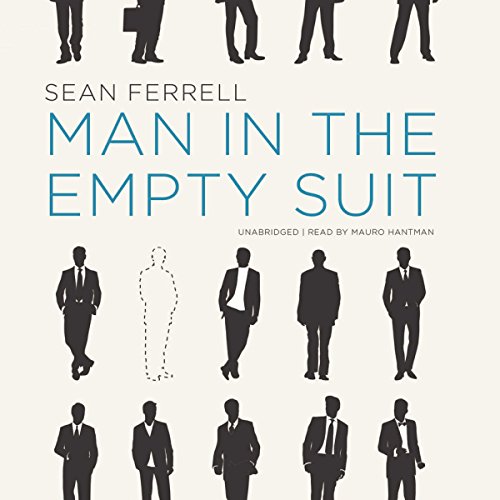 Man in the Empty Suit

By: Sean Ferrell
Narrated by: Mauro Hantman
Try for £0.00

Say you're a time traveler and you've already toured the entirety of human history. After a while, the outside world might lose a little of its luster. That's why this time traveler celebrates his birthday partying with himself. Every year, he travels to an abandoned hotel in New York City in 2071, the hundredth anniversary of his birth, and drinks 12-year-old Scotch (lots of it) with all the other versions of who he has been and who he will be. Sure, the party is the same year after year, but at least it's one party where he can really, well, be himself.

The year he turns 39, though, the party takes a stressful turn for the worse. Before he even makes it into the grand ballroom for a drink he encounters the body of his 40-year-old self, dead of a gunshot wound to the head. As the older versions of himself at the party point out, the onus is on him to figure out what went wrong - he has one year to stop himself from being murdered, or they're all goners. As he follows clues that he may or may not have willingly left for himself, he discovers rampant paranoia and suspicion among his younger selves, and a frightening conspiracy among the Elders. Most complicated of all is a haunting woman - possibly named Lily - who turns up at the party this year, the first person aside from himself he's ever seen there.

For the first time, he has something to lose. Here's hoping he can save some version of his own life.

What listeners say about Man in the Empty Suit

GREAT Listen...but you have to work for it

One of the things that makes it hard to write book reviews is that there is a conflict between wanting to express your own views and a duty to readers. My view is that this is maybe one of the best books I've read. It is Pynchon. It is one of a limited number of science fiction books that qualifies as literature. The author clearly worked this manuscript until it was perfect.
Ok....That was for me -- this is for you. Do not listen to this unless you really want to work on it. There are times it repeats. There are times it is relentlessly dystopian. There are times it is just plain sad and heartbreaking.
It is set in a not too distant post-something New York. Life is hard and not entirely well-balanced. There is a mystery, there is a dark humor. There is aggressive time-loopery. If you get to half way and think you want to kill this reviewer -- stick it out.

Stumbled on this book last week, downloaded on a whim. One of the best audio purchases I have ever made.

The book has a very refreshing, unique, complicated premise. It is not the Grandfather paradox – it is more immediate – if you kill a different year’s version of yourself, what happens to your future ‘selves’?

The first half of the book is a race to escape within a nightmarish, claustrophobic scenario, where all the characters are the main protagonists at different ages, where one is a murderer, and one may, over the months, age to become the murder victim. The second half of the book takes its time to linger on events and the results of ones' actions. I was not sure how it could end - but the closing two scenes were pleasingly well done.

If you like a twisty puzzle of a book, set in a dystopian future with an element of time travel you will find this book extremely interesting.

Your future self is telling you to skip this book.

In one version of your future you don't purchase this book and never realize how much better your life is. In another version you do buy this book, listen to it and wish you could go back in time and tell yourself not to. I'm living in that second version.

I love mind bending science fiction. I love those stories that are hard to follow. The ones you have to pay close attention to, but that have a big pay off. This one made me feel cheated.

The first 3 hours or so are great. It was hard to follow, but I was enjoying the crap out of it. Also, the last couple hours make you feel like it's going somewhere, that you're going to be impressed and that you didn't waste your time. However, when it is over you're left going, "that's not right! That can't be!"

Plus, there's about four hours in the middle that is just bad, boring writing where the characters act in strange ways for no particular reason. While suffering through that part I was thinking, "all this will have a significance in the end."

Then there are so many inconsistencies and unanswered questions and unexplained motives and...

I'm going to stop here. You get the point.

This was a vividly told and engaging story. Not since Robert Silverberg's mid-'70s Up the Line has time travel been so meticulously explored and the paradoxes so deftly treated. Avoiding spoilers is difficult, but the relationships among the characters are surprising almost every time, and the plot is twistier than one of those new compact fluorescent lightbulbs.

I did not understand how dystopic the setting of this novel was from the summary or the reviews. One previous reviewer states that the story actually has two parts. I stopped listening several hours in, but before reaching a change in the story line. Didn't really get a feel for any other points in time or places other than a miserable hotel room in an abandoned city.

I was not feeling much of a time travel paradox nor could I figure out if time travel was available for anyone else to use other than the main character. The reader is rather unceremoniously inserted into the middle of this story and in the midst of people so different that it was hard to believe they were all different versions of the same time traveler.

Up there with the best.

Though there is no shortage of science fiction with time travel elements in these days, also running in the cinemas, this book sets itself apart by its super attractive narcissistic concept.

All book long, you will linger between compassion for the protagonist, and a state of confusion with the elements of time paradox and destiny driving you close to madness. This has been one of my best listens ever.

Read this now before it is picked up and made into a movie. And by the way, the movie will be awesome!

This book was one of those rare finds that really draw you in. I loved the moving story line. there was only one spot that stalled briefly, but it really fleshed out the characters and turned them into real people. The narration was perfection, the voice matched the character quite well and drew you into the story. I was very impressed with this book and will be looking for more by this author.

A great listen. Occasionally approaches the edge of "confusing" but never steps over it. Just twisty enough to keep you on your toes. A solid, smart book and a solid performance. I would put this on a "must-hear" list for time travel fans.

This book was hard to get into for the first 30 chapters after that you finally get the plot. Drags to much until the 2nd half. Like the concept makes you think. Very different.

I expect you will quit this a third of the way in having retread ground covered not just in other books but in this very volume. You see, it suffers from a lack of economy, and were I not a sucker for every permutation of paradoxical potentiality possible I would have just said “variation.” And you would have kept your peanut butter out of my chocolate. It does not work as a mystery but a long slog to an unsatisfying reveal. Niven’s detective Gil Hamilton stories combine genre to greater effect and thrift. The moral soliloquy is several hours too long. Gerrold’s more daring Man Who Folded Himself plays with similar themes and, decades later, is still a superior work. Check them out.