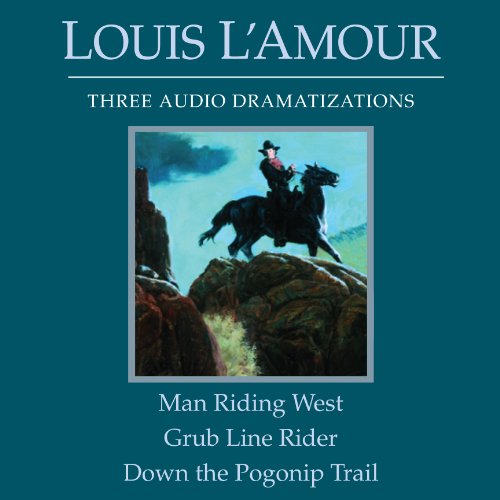 "Man Riding West": Jim Gary had always tried to avoid trouble, but after he is forced to kill a Mexican gunman in a cantina showdown, trouble seems to seek him out. A shoot-out with the gunman’s vengeful outlaw buddies sends Jim on the run with an unwanted reputation as a dangerous gunslinger. And when he hires on as a cowhand, Jim risks being strung up as a rustler and murderer - unless he can use his wits as quickly as his guns.

"Grub Line Rider": Most folks would call Kim Sartain an easygoing, peace-loving man, but the few who crossed the young drifter know there is nothing he likes better than a good fight. When cattleman Jim Targ challenges Sartain’s right to ride across an unclaimed stretch of meadow, Sartain decides he’ll do better than ride through: He’ll put down stakes there and homestead the land. There’s more at risk than land and pride when Targ hires a gunman to teach Sartain a permanent - and deadly - lesson.

"Down the Pogonop Trail": Jeff Kurland didn’t have a gun; he didn’t have a chance. The rancher knew that even as he scanned the cabin for a weapon, any weapon. He was trapped with a killer who had a pistol in his hand and a bounty on his head, and outside the pogonip swirled and fell. Death would creep into the cabin with the bone-chilling cold or slice through him with the speed of a bullet. Either way, time was running out...for both of them.

Not terribly long compared to other full book audiobooks, but it's so enjoyable I'll probably play this in the car with other friends

Another Masterpiece by Louis L'Amour

This 3 stories are great. is like you are actually there. The sound effects are top knoch is like watching a movie. I highly recommend any of his stories

This was a really great book! His books are always great stories! I highly recommend it!

it was good but I thought that stories is dragged a little. it wasn't like his usual story that one more exciting


loved it!!!!
Louis Lamour at his best as always!!! definitely recommend it!!! will keep you entertained!