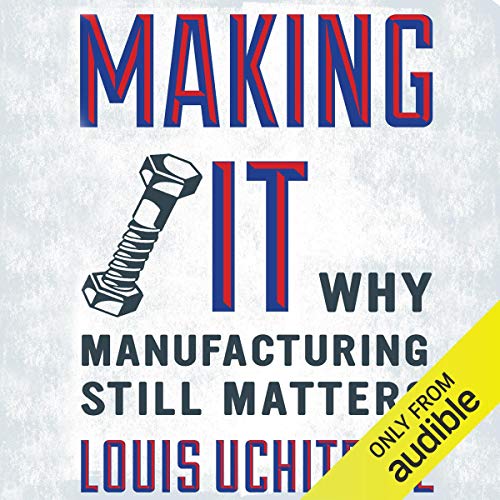 From the longtime New York Times economics correspondent, a closely reported argument for the continuing importance of industry for American prosperity.

In the 1950s manufacturing generated nearly 30 percent of US income. Over the past 55 years that share has gradually declined to less than 12 percent at the same time that real estate, finance, and Wall Street trading have grown. While manufacturing's share of the US economy shrinks, it expands in countries such as China and Germany that have a strong industrial policy. Meanwhile Americans are only vaguely aware of the many consequences - including a decline in their self-image as inventive, practical, and effective people - of the loss of that industrial base. And yet, with the improbable rise of Donald Trump, the consequences of the hollowing out of America's once-vibrant industrial working class can no longer be ignored.

Reporting from places where things were and sometimes still are "Made in the USA" - Albany, New York, Boston, Detroit, Fort Wayne, Los Angeles, Milwaukee, Philadelphia, St. Louis, and Washington, D.C. - longtime New York Times economics correspondent Louis Uchitelle argues that the government has a crucial role to play in making domestic manufacturing possible. Combining brilliant reportage with an incisive economic and political argument, Making It tells the overlooked story of manufacturing's still-vital role in the United States and how it might expand.

This book is well narrated.
Having work in manufacturing In the UK for my entire career from 2001. This book helped me understand some of the reason for the witnessed downturn in manufacturing and showed some ideas on how it could be rejuvenated.
I found this book both approachable and technical, giving concise
explanation and I found it very enjoyable.

Important Subject-Rarely Covered by the Media

The book is written by veteran NY Times reporter - Louis Uchitelle. The book arrived with no fanfare, recorded by Audible. I'm not sure it is available in written form. I bought it having been familiar with Uchitelle's writing.

I think the book could have been more comprehensive. It's mostly Uchitelle's 1st person accounts of various manufacturing companies he's dealt with over the years. He puts forward a few theories about why manufacturing is dwindling in the U.S. and some ideas for its revitalization.

He could have spoken to some of the economists who have said that persistent trade deficits usually lead to stagnant growth in an economy, and big problems. and why this hasn't happened yet in the U.S. Because I've studied this issue I'll answer this question myself. My theory is that because the U.S is a reserve currency, and because of the problems with the Euro, the U.S. dollar is strong, and investment is strong. However, I believe that dwindling manufacturing and persistent trade deficits, will eventually sink the dollar, and cause big problems. We've already seen stagnant wages for like 30 or 40 yrs. and declining standards of living.

so you see, that the book is lacking some comprehension and analysis. However nobody else is really dealing with this issue, except Uchitelle's book. So if you're interested in this subject, I recommend the book.

Automation is not feasible to regulate, which the author does not even really touch on factories that are highly automated, and how that doesn't help employment. What the author basically describes is a form of universal basic income. Which is not thought out very well. If you subsidize a factory how can you prevent automation from being purchased instead of hiring more people? Are computers considered automation because all manufacturing requires them, but if you took away computer controlled machines we would have a massive increase in employees needed (and with it cost). Where do you draw this arbitrary and imaginary line? (background: I own and operate a machine shop)