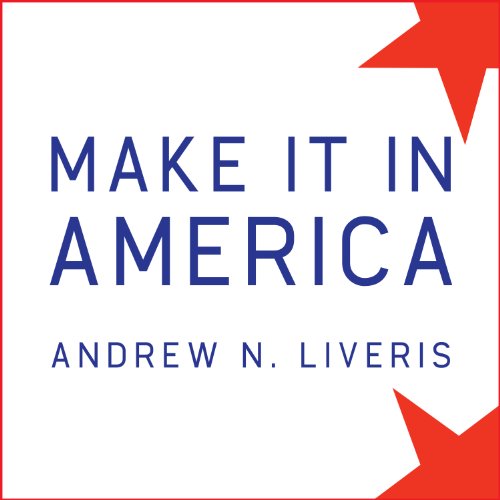 Make It in America

We used to make things in this country. We were the dazzling innovators, the undisputed world economic leaders, and with our manufacturing engine driving the process, we built a solid, high-achieving middle class and a thriving economy. Now, thanks to policies that are either indifferent - or downright hostile - to manufacturing, we're at the brink of losing it all. If you think this won't affect you, guess again.

In Make It in America: The Case for Re-Inventing the Economy, author Andrew N. Liveris presents a powerful case for the critical importance of domestic manufacturing to the long-term health of the entire U.S. economy and issues a candid wake-up call to America to reinvent its manufacturing base before it's too late.

If anyone has street cred on this subject, it's Liveris. Currently chairman and CEO of the Dow Chemical Company, one of the world's largest manufacturers and of the most global corporations, he's been on the global manufacturing stage for over 30 years. In this thought-provoking book, Liveris challenges conventional wisdom and, using vivid examples from around the globe, makes clear that:

Government's got to get engaged. Liveris argues it's a false choice to claim that you must be either pro-business or pro-government. Globalization has changed the equation, and governments all over the world are working in partnership with - and taking action on behalf of - their leading industries. Why isn't America? Liveris sees where America is losing ground - from innovation to job creation - and explains how we can take back our future.

"Andrew Liveris has produced a well-written and timely book that deserves wide circulation. Everyone concerned with America's economic difficulties should read it." ( The Washington Examiner)

What listeners say about Make It in America

Politicians Should Read This!

Finally, a CEO explains in plain english why manufacturing jobs are necessary for America's economy and what the government can do to help create them.

And no, it's not the high cost of labor!

The author explains how higher productivity of American workers actually saves companies time and money. It's all the complex and inconsistent regulations that very from state to state that hold companies back. Business leaders have to plan for the long term, so tax credits that only offer temporary relief are just not enough. Other countries use long term incentives to get companies to build their factories there, but the US govement just doesn't get it. I wish all lawmakers would read this and put more effort into creating a system that encourages business leaders from all over the world to build their factories here.

The title of the should be "Corporate Welfare". To summarize you need to give tax incentives, subsidizes, free land etc. or companies will leave for foreign countries because they bribe the US companies better than the US. So fork over the money US or we will leave and let you rot.

Would you recommend Make It in America to your friends? Why or why not?

If you are liberal you will love this book because he loves to quote Kennedy and mentions FDR several times.

Did Dick Hill do a good job differentiating all the characters? How?

He did a great job of reading the book. The only thing missing was an Aussie accent.

Could you see Make It in America being made into a movie or a TV series? Who should the stars be?

Shoe this right after Atlas Shrugged.

I agree with many items but I get tired of his advertisements for Dow. I totally disagree with his alternative energy point of view. We should be spending money on natural gas infrastructure as opposed to solar and wind. Neither of witch will be the future other than maybe 15% of the total US demand. He just wants Dow to be subsidized for producing solar shingles.

everyone in america should read this book

If you could sum up Make It in America in three words, what would they be?

What was one of the most memorable moments of Make It in America?

Mr. Liveris relates the many areas where America has lost its edge among world leading countries. China and Germany surpass America in clean air renewable resources which helps the businesses located in those countries reduce energy costs.

Mr. Hill conveyed with humor the seriousness of the material.

The material will influence how I will vote in the future.

This is the worst book I've heard or read in years

We have enough problems in our country without over paid CEO's whining about how the government does not provide enough economic support to build factories in the US. Instead how about having the US look at unfair economic activities by our competitors and punish those countries for unfair labor practices.

The US is neck and neck with China as the largest manufacturer in the world. If you just listened to this book you would think there are several countries who manufacture much more than we do.

Yes, there are problems in the US in the manufacturing sector. Many of them are self made. But, asking for government bail outs of business is for the most part not a great solution.

You would also think listening to this book that only China and India are competing with the US. You could of course read Start Up Nation and find out that Israel has provided some of the most important technology that's used in the world and in American companies. It's not just China and India, although both compete unfairly in many ways.

There was no mention in this book about China stealing American intellectual property. That might be a good reason for companies like Dow to think twice about opening up there. Why should we transfer our technology for nothing.

I'm ashamed to say that this person is running one of our largest companies. With his attitude it's no wonder that the Fortune 1000 have been net job losers over the past twenty years.

There was no mention in his book about our disappearing middle class. No mention why his group of executives should be paid 350 times the average worker in their company. That also might be a problem that we're having in this country. If you look at the countries we're competing with their CEO's don't steal shareholder money by overpaying themselves. But of course, that's not a problem with us, it's the poor productivity and education in our country.

This book is a big bunch of inaccurate information and half truths. Readers should beware of this type of blatant self interest and ego writing.

The Case for American Enterprise

If you could sum up Make It in America in three words, what would they be?

Detailed explanations of the logic of business decisions

Which character – as performed by Dick Hill – was your favorite?

He really was one person, the author in this.

When I realized what other countries are already doing to insure business development.

Could be subtitled "its not all about labor costs"

Written by the CEO of DOW chemical company.
Many very good points made from an experienced person in the field.

Presents solutions to problems--but also uncovers and explains many things about how we got to where we are--which is not competing very well in the global market by attracting and keeping business here.

One thing that I did not like was that he says that our Les e faire/free market system is not working well. However, our system is not, and has not been truly free market in a long time. Even with that slight glitch, I feel this boox is a good, informational read for many of us--laborers to CEOs. In fact, some of the things I learned from this read I will be implementing in my children's upbringing--like concentrating on higher maths, science and technology in their schooling.