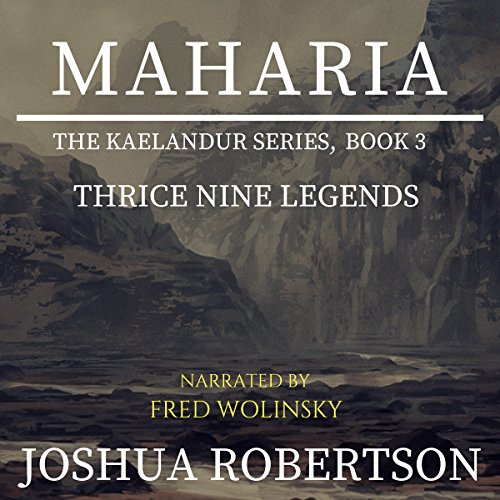 Branimir has remained hidden from the enemy, withholding the cursed dagger from their erroneous hands. When a stranger arrives and offers the chance to end his never-ending battle, Branimir sets off for the City of the Gods for answers.

Now, hoping his faith has not been misplaced, Branimir undergoes his darkest adventure yet. He can only trust he has the courage to survive the truth.

What listeners say about Maharia

It was great to again listen about old characters and get to know few new ones. I don't know what to think about the ending but it is as it is😕 Great that same narrator did continued with the series as I got used to his voice😄 Thank you author for the interesting audiobook👍😊

This was a good story if you are into this sort of thing. Highly recommended.

Dark and full of action like the last two. Again, Branamir is the lead character, and about the only person in the series you can really attach yourself to. It seems everyone else has a short shelf life, that as a reader it puts you away from trying to connect with anyone too deeply. You never know how long they're going to last. There were plenty of twists and turns, and a clear goal in mind. Instead of the whole series revolving around a ring, it all revolves around a special dagger, which has as many positive qualities as it does negative qualities. And, it is the key to survival, as well as death. If you like a darker fantasy, full of action, you'll love the series that Joshua Robertson gives you. Either I've gotten used to the odd narration, or the narrator got better as the books continued on, but book 3's narration wasn't as bad as the first two.

Great story, that keeps you guessing throughout.

I enjoyed the story and loved the set up of the climax. I found the characters to be really enjoyable, and it had an interesting ending.