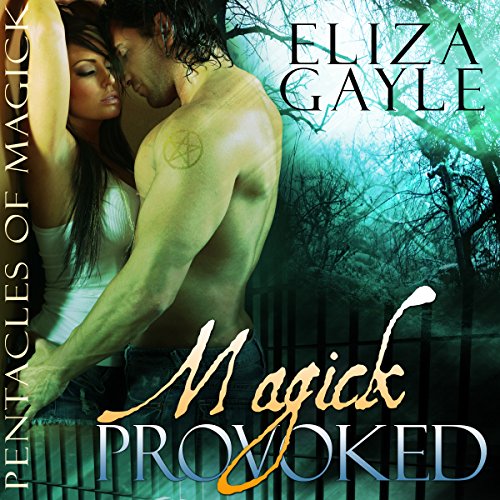 By: Eliza Gayle
Narrated by: Johanna Fairview
Try for £0.00

The final chapter of the Pentacles of Magick series comes to an explosive end!

As a demon hunter, Noah has seen and done it all...until his twin sends him to rescue a woman he wanted to forget.

Noah Scott is a mercenary hell bent on ridding the world of evil, one demon at a time. He walked away from the family prophecy determined to do things his way. Until one woman had tempted him then left without a trace.

Jessie has spent her whole life hiding her darker side from those who would never accept her. When she met gorgeous Noah she knew he would be different and their passion ignited a connection neither of them understood.

Now they must face the past and their future in a race to save his family, while fighting a sexual desire threatening to destroy them both.

If you've enjoyed the Pentacles of Magick series be sure to check out Eliza's shapeshifter romance series that begins with Lucas.

What listeners say about Magick Provoked

The end of the series...

Sigh, the end of a series is always bittersweet. I was really loving the stories for the smexy twins. I could have used a but more in the resolution of the major plot, but it was great in the romance.

I love yummy alpha types like Noah. He is all boss and Dom voice. Jesse really does not stand a chance. They have such awesome chemistry and the history makes the feeling believable.

I was a bit disappointed in the end of the plot with the uncle, I just wanted more. There was so much build during the series, then it just kind of ends in ten minutes. I would love o see this book expanded, giving us more of the voodoo priestess and coven. I feel like there is so much story there that could be told.

The narrative is a great mix of the leads and the bad gut. Mostly you get Noah and Jesse's POV, which gives you insight into their true feelings. There are many more layers at play here because they were together before and the issues with her demon half being secret.

I listened to the audiobook narrated by Johanna Fairview, who does a great job with the read. She has a deeper raspy tone to her voice. It really works for the smexy scenes and the men's voices. She also added just the right touch of softness to the women's voices. When it comes to the energy of the smexy scenes, this narrator really gets into things! You can feel the action and tension of the moment in her enthusiastic narration! I loved her work throughout the series. I will definitely be looking for more of her reads. She gives good voice!