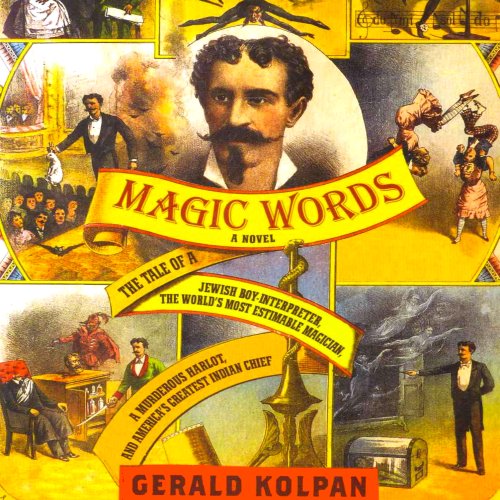 Narrator Michael Goldstrom's agile performance will have listeners riveted by this story about a young Jewish immigrant who comes of age in the wake of the Civil War. Julius Meyer is captured by the Ponca Indian tribe and becomes the interpreter for noble chief Standing Bear. When Julius' older cousin Alexander - known as the Great Herrmann, the most famous young magician in America - arrives, Julius must deal with the consequences of Alex's affair with the glamorous Lady-Jane Little Feather, a prostitute whose scandalous antics are the talk of two continents. Goldstrom voices these larger-than-life characters with aplomb, giving their colorful personalities room to take shape in listeners' minds.

In a riveting novel of love and adventure, young Julius Meyer comes to the New World to find himself acting as translator for the famed Indian chief, Standing Bear. Young Jewish immigrant Julius comes of age surrounded by the wild world of 1867 Nebraska. He befriends the mysterious Prophet John, who saves his life when the two are captured by the Ponca Indian tribe. Living as a slave, Julius meets the noble chief Standing Bear and his young daughter, Prairie Flower, with whom he falls in love.

Becoming the tribe’s interpreter - its “speaker” - his life seems safe and settled.But Julius has reckoned without the arrival of his older cousin, Alexander - who, as the Great Herrmann, is the most famous young magician in America. Nor does he suspect the ultimate consequences of Alex’s affair with Lady-Jane Little Feather, a glamorous - and murderous - prostitute destined to become the most scandalous woman on two continents.

Filled with adventure, humor, and colorful characters, Magic Words is a riveting adventure about the nature of prejudice, the horror of genocide, and a courageous young man who straddles two worlds to fight for love and freedom.

What listeners say about Magic Words