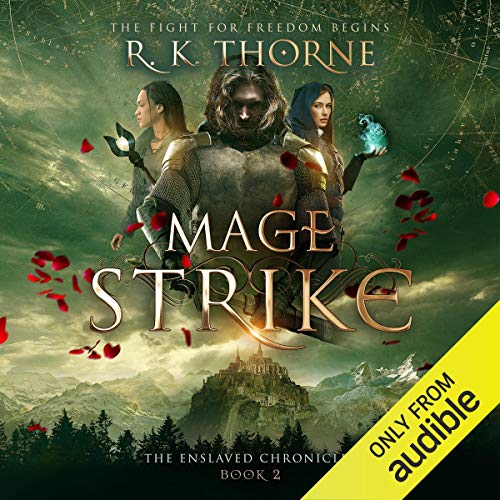 The fight for freedom begins.

The hard part should have been over. Former slave Miara and Crown Prince Aven have escaped with their freedom and their lives. From kidnapper and captive, they've grown into a powerful partnership. And they've returned to the mountain fortress of Estun, triumphant, to warn his people of the rising menace just across their border.

But escape was only the first step. War looms. Hundreds of mages still live in slavery. Neither the king nor the queen believes the people will support a foreign spy as crown princess, no matter how loyal Miara truly is. And enemy agents plot to keep Aven from the throne by any means necessary, be they mundane - or murderous.

On top of it all, the Dark Master has plans of his own: to enslave a vast mage army bound to his will alone. To obliterate all knowledge of the forbidden star magic, no matter the cost. And to get a little revenge too, while he's at it.

I'm looking forward to the final book. its nice to visualize and pleasing to hear something that's not trying to be clever by confusing the reader

I enjoyed the story. It was an entertaining getaway while riding the bus home. I look forward to the next story.

much better narration than book 1

The narration was hard to get through the first one and while I think some of the improvement may have been me just getting used to it, I do think it was just done better. The story is certainly good enough Ill be getting the next one.

There is so much I really enjoyed about this second book in The Enslaved Chronicles. Miara and Aven make it "safely" home to Estun, his mountain home/castle in Akaria, only to confront the suspicions and prejudices of family and "friends." One aspect of the story that I personally savored is that we don't need any trumped up angst between Miara and Aven in order to be completely drawn into the story line. The characters are so well written and stay true to form as we have come to know them in book one, Mage Slave. Although they face situations seemingly designed to cause division between them . . . and, indeed, are separated for some very critical situations in this segment . . . their commitment and connection are never truly in question.

Whereas, a second book in a trilogy is often seen as mere fluff as compared to the buildup of the world and characters in book one, I definitely did not find this to be the case with Mage Strike. We meet new characters who in no way felt like 'filler' to carry on the existing story line. I was fully intrigued by Jaena and, even moreso, by Ro...and can't wait to learn more of their story and background. There are an abundance of intriguing characters and a number of villains as well.

Overall, I highly recommend this series to anyone who enjoys fantasy, warfare, romance, world-building, and magic. The romance is strong but does not outweigh the overall theme of magic or the struggles of warfare. The characters are appealing, intriguing and, sometimes, despicable.

I'm definitely moving directly on to book three, Star Mage. (Also, if you are an Audible listener, the narration is well done by Tanya Eby.)

I got hooked on the first book and couldn't wait to see what happened next! Love this series! Magic, suspense, conflict, romance, and magic all combine for a great adventure!

If you could sum up Mage Strike in three words, what would they be?

What other book might you compare Mage Strike to and why?

Not sure as this is not a genre I typically read.

I enjoy her performance of Miara the best, but I enjoy listening to all of the characters.

I was on pleasantly entertained till the very end, and I look forward to the next book.

I really enjoyed the story. No lulls in the storyline author alway kept you engaged.

A good continuation. Romantic fantasy as well as an action packed and interesting storyline. Both the main characters have strong and determined personalities to make things right for their world. Good concept. Hope book three will come out soon.

loved every bit of this book, maybe even more than the first, actually. the new characters are a welcome addition to expand the story and the world. I can't wait to read the third!

I will read the next one

It kept my interest and I want to know what is coming Good narration as well.