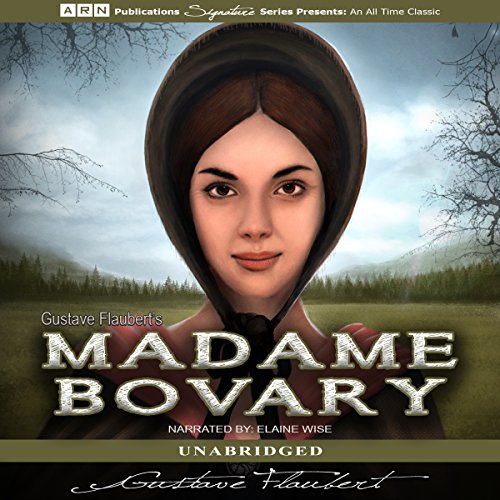 Flaubert's novel Madame Bovary exposes the extent to which social image, public persona, and wealth played a significant role in the everyday lives of French society in the mid-1800s.

Though he embodies neither wealth nor a lavish persona, Charles Bovary - a somewhat established doctor - takes a chance in marrying the young, vibrant, and ambitious farm girl Emma Rouault. At first, Emma is delighted to be married and away from her father's farm, but her thirst for the rich and ornate lifestyle that she witnesses other people living soon drives her away from her husband and into the arms of various suitors.

Blinded with the promise of riches, Emma makes some drastic miscalculations, which sends her, and consequently her husband, into debt, eventually amassing to the point that she cannot repay.

Combining romance with heartache and deception, Madame Bovary will have an eternal place in the list of classics. It is a sometimes sorrowful, sometimes joyous representation of how love and lust can move us to make radical decisions, and how individuals deal with the consequences of these actions.

What listeners say about Madame Bovary

Life is too short to read bad books or drink cheap wine. I have never disliked a book as much as this and simply cannot finish it, nor can I find the energy to explain exactly why. Sorry.

The story of Madame Bovary is well written, and the narration is very good. If your life is going along pretty good, give it a try. If you're suffering from ennui, skip it until your life is better. It's sad, and could put you into a funk, but it's so well done.

Different than the book

I am reading this book for literature class in the fall, and I always enjoy listening while reading along with the book, but the audio and the text are almost completely different, some lines taken out or added in, different terms for words and just overall different. Other than that she read it well, just don't get it if you plan to read along

What disappointed you about Madame Bovary?

Selfish, self-absorbed, young girl with an overactive imagination marries too young to an uncomplicated, ordinary country doctor. Almost immediately, she cannot bear the banality of her marriage and her domestic life. She begins to loathe her husband. She dreams of a high society life full of interesting culture and all the privileges of wealth. She seeks to get her fantasy life and love needs met through a couple of romantic affairs, but they don’t work out as expected. Meanwhile, she runs up a huge amount of debt pursuing her secret, on-the-side life, for which she is unable to pay. The story ends with her committing suicide when confronted with these debts, and leaving her husband’s reputation and finances in ruin. The husband dies in madness and psychological pain, and the daughter ends up being raised by other relatives.

Perhaps something was lost in translation, but I really did not appreciate any of the main characters - Emma in particular. I just found her to be an unlikable person. It's not her morals I have a problem with, but rather that she was just phenomenally selfish and childish and frivolous. She seemed like she had a screw loose and not in the good way. I'm sure that this book can be analyzed on many different levels, including women's limited options during the time it was written. Or, that it was groundbreaking for it's upfront "sexuality" given the social mores of the time. Nevertheless, even accounting for the time period, and the possible deeper levels of analysis, I found that the book just wasn't written that well.

What could Gustave Flaubert have done to make this a more enjoyable book for you?

The mechanics of the story were rough and blotchy. The dialog was confusing. The story jumped around a lot and was difficult to follow. There was no consistency of tempo - that is, the author would go into some minute detail for many paragraphs about a given character's experience, then briefly describe the next few years or decade with a single sentence. It was like being on a rickety amusement ride that is not smooth and leaves one feeling ill from all the sudden stops and jerky forward movements. The basic plot of the story could have been potentially very interesting. I just found the writing to be really bad.

Did Elaine Wise do a good job differentiating all the characters? How?

The reading just plodded forward relatively fast with no real differentiation of the characters. She could have slowed down, paused more frequently, and used different intonations to represent different characters.

What character would you cut from Madame Bovary?

Madame Bovary herself - Emma - would have been a lot more interesting to me if she was bold, brash, overtly sexual, and otherwise confident and unapologetic. Rather, she was just goofy and sad and took no real responsibility for her own plight.

The real issue is how miserable one can be when trapped in a relationship or some other aspect of life, without any options to improve the situation. Today, Madame Bovary would not have been in the marriage to begin with, or would have gotten a divorce, and then she would at least have the freedom to pursue the life she wanted. Regardless of whether or not it would have worked out and led to her happiness, she would at least have had the freedom and opportunity to try to be happy.