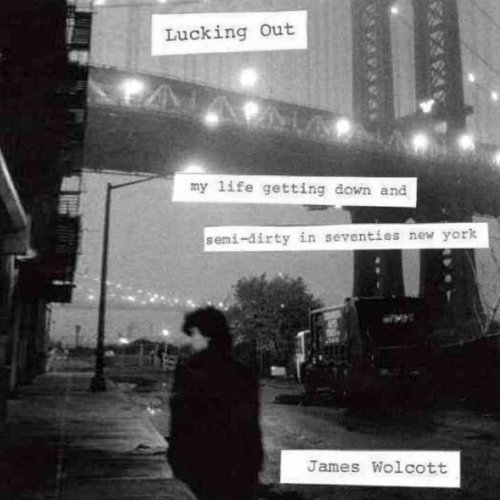 My Life Getting Down and Semi-Dirty in the Seventies
By: James Wolcott
Narrated by: Jeff Woodman
Length: 10 hrs and 21 mins
Categories: Biographies & Memoirs, Artists, Writers & Musicians
4 out of 5 stars 4.0 (1 rating)

"How lucky I was, arriving in New York just as everything was about to go to hell."

That would be in the autumn of 1972, when a very young and green James Wolcott arrived from Maryland, full of literary dreams, equipped with a letter of introduction from Norman Mailer, and having no idea what was about to hit him. Landing at a time of accelerating municipal squalor and, paradoxically, gathering cultural energy in all spheres as "Downtown" became a category of art and life unto itself, he embarked upon his sentimental education, seventies New York style.

This portrait of a critic as a young man is also a rollicking, acutely observant portrayal of a legendary time and place. Wolcott was taken up by fabled film critic Pauline Kael as one of her "Paulettes" and witnessed the immensely vital film culture of the period. He became an early observer-participant in the nascent punk scene at CBGB, mixing with Patti Smith, Lester Bangs, and Tom Verlaine. As a Village Voice writer he got an eyeful of the literary scene when such giants as Mailer, Gore Vidal, and George Plimpton strode the earth, and writing really mattered. A beguiling mixture of Kafka Was the Rage and Please Kill Me, this memoir is a sharp-eyed rendering, at once intimate and shrewdly distanced, of a fabled milieu captured just before it slips into myth. Mixing grit and glitter in just the right proportions, suffused with affection for the talented and sometimes half-crazed denizens of the scene, it will make listeners long for a time when you really could get mugged around here.

A fun, dishy, literary romp from the periphery

Would you consider the audio edition of Lucking Out to be better than the print version?

I never read the print version, so I can't really say.

Would you recommend Lucking Out to your friends? Why or why not?

I'd recommend it to writer and/or reader friends who want to live--or relive--a print-era New York City, with passing glances at many of the characters and players the likes of whom we're not likely to see again.

A wonderful reader--energetic, flowing, seamless, with just the right amount of inflection to suggest he was feeling the spirit of the text; not performing it.

I wouldn't go so far as to say an "extreme" reaction--the work is not supposed to trigger one. But I did find myself laughing out loud at certain asides and turns of phrase.

A fun, almost-gossipy, easy-listenin' reminiscence that strikes the right balance between self-deprecating charm and one-analogy-too-many (but he'll apologize for the latter). I thought it was a blast.

Name a cultural movement still resonating today, and I bet you’ll see it’s roots in New York in the Seventies.

From the New York City Ballet to CBGBs, James Wolcott was sitting in the back of the room quietly observing the artistic revolution.

With his singularly evocative style, Wolcott takes you from his beginnings in obscurity, to blustering his way into a writing career, eventually ending up the cultural critic for Vanity Fair.

He may have been lucky by being at the right places and times, but his writing chops prove luck wasn’t all.

“Next door to the Latham hunkers another low-profile holdover, the Prince George, which, before the gold medallions and furry testicles of disco descended, was a popular layover for flight crews whose trim blue uniforms and clippy stride made everybody else on the sidewalk look like clumps.”

"Gold medallions and furry testicles of disco?"—Luck had nothing to do with it.

Jeff Woodman, Audiofile Magazine's 2001 narrator of the year. He makes New York come to come to life, an susses out every wry note of observation.