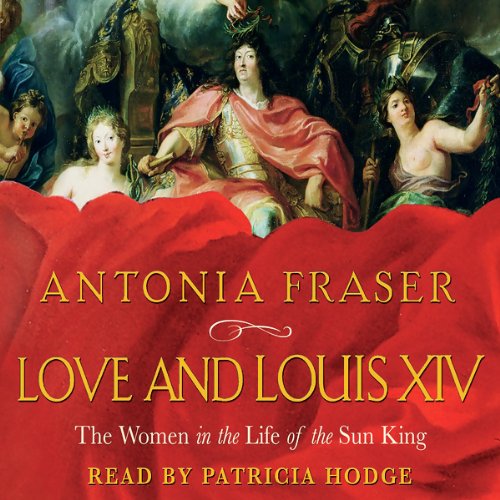 By: Antonia Fraser
Narrated by: Patricia Hodge
Try for £0.00

This audiobook centres around the Sun King and his relationship with numerous and fascinating women.

Naturally dividing into five parts, it concentrates on the King's mother, Anne of Austria, to whom he was devoted; his first important mistress, Louise de la Valliere, who bore him several illegitimate children; Athenais Marquise de Montespan, who acted as unofficial Queen of Versailles until her involvement in the affair of poisons; Marie Therese, his wife, of course; and Madame de Maintenon, governess to the illegitimate royal children. The fifth part concentrates on his relations in old age with his daughters, granddaughters, and the wife of his grandson.

Fraser vividly bring to life the vast edifice of Louis XIV's court - the magnificence, artistic splendour, elaborate ritual, and, in some cases, the absurdity and misery.

"As Pat Hodge reads (superbly!)....Fraser draws the listener into the world of splendour and intrigue, injecting fresh life into the long-dead characters who inhabited it." ( Daily Express)
"This audiobook represents an ideal three-way marriage of subject, author, and reader." (The Scotsman)
"Hodge reads with queenly grace." (The Sunday Times)

What listeners say about Love and Louis XIV

Well up to her best!

Having watched the TV series it was good to get a reliable and detailed survey of the private life of this colossal figure, in context with the history we already knew from school. You don’t even really need to know anything of the context to be able to thoroughly enjoy this well read little masterpiece.

This was my first audible - I love Antonia Fraser and enjoyed this book immensely - it would help to have images of the characters.

Well worth listening to

I very much enjoyed this book. The narrator was clear and interesting to listen to. I am fascinated by that period of time and, in particular, Versailles so this book was a very enjoyable listen.

As expected, from Antonia Fraser, another good book on royalty. Read superbly by Patricia Hodge. It covers, sorry for the pun, King Louis XIV of France's love life and all the women who loved him, from his infancy until his death. I must admit I thought there were a lot more than AF talked about. Good listening, good book what more could you want.

It's sometimes hard to believe all these things actually happened, it was an Insightful exploration into what we now know to have been the typical French monarchy.