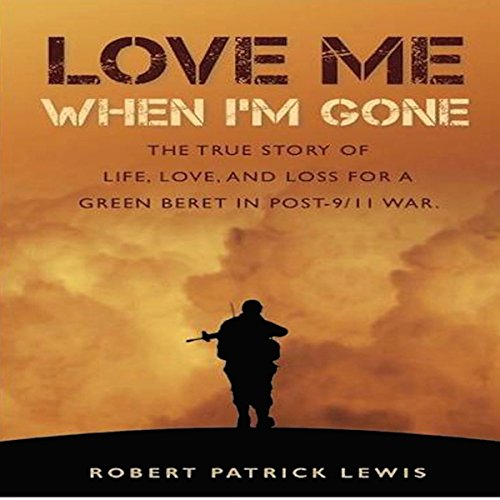 Love Me When I'm Gone

Love Me When I'm Gone

Love Me When I'm Gone is a tale for the ages, the perfect blend of action, romance, heroes, villains, patriotism, and valor. What holds this story above all others is the fact that this one is true.

Rob had a pretty rough childhood: He was given up for adoption as an infant, brought into a family of highly decorated military men, suffered the loss of his mother to cancer, rebelled, and landed himself in military school.

When he finally returns home, he meets Cindy, who quickly becomes his best friend. After graduation the two go off to college at opposite ends of Texas, and their paths diverge.

Eight years later, when Rob returns home from SERE school and being a POW in the cold North Carolina woods, he wakes up one morning to discover that Cindy has contacted him on Myspace. He is very surprised, as he has been searching for Cindy for the past few years to no avail. The two reunite to spend his month of leave together, both knowing at the end he will be leaving for the illustrious 1st Battalion, 10th Special Forces Group (Airborne), the elite Battalion of Green Berets stationed in Germany for quick-reaction missions around the globe. The two share a heart-felt goodbye at the airport, each hoping that somehow they can find a way to keep their love alive throug whatever the future has in store for this newly crowned Green Beret.

Rob's time in Germany is a whirlwind. In his first trip to Iraq, he encounters three distinct situations which will haunt him for the rest of his life. At HAVE-ACE, the Special Operations school which he attends with his team, he finally becomes one of the gang. In Africa, Rob learns many valuable lessons about life. In Afghanistan he and his team are tested in many life-or-death situations, including Operation Payback, where he and the Captain are wounded in a sustained firefight in the middle of a village.

The culmination of the story is the quintessential fairy-tale ending: Rob moves back to California to spend the rest of his days, and the final chapter is the full military wedding, complete with his teammates as groomsman and sword bearers.

Would you listen to Love Me When I'm Gone again? Why?

The author narrates it which I feel just adds to the richness of a title... you just get a better experience when the author reads it to you.

The book starts off how you'd expect, Rob gives you a brief rundown of his life leading up to his time in ODA 002. He then gives good accounts of some training experiences as well as some deployments. To say anymore would be to ruin the book, definiteily pick up a copy in your favorite medium!

This is by far one of the best books I have read/listened too. I started listening to this book and I did not want to stop. Great storyline I like how he kept it going from chapter to chapter. It takes you through a roller coaster of emotions. The narration was great very enthusiastic. I would recommend this book to all my friends and family!!!

What made the experience of listening to Love Me When I'm Gone the most enjoyable?

If you have ever served or wonder what it is like read this. Remember that no matter what our military is made up of people either like you or someone that you knew. As I read this it brought back many memories from my 14 years of service. Those were some awesome times. Yes things were not always (usually) the best. It was the brotherhood that kept me going.

The man's words in his own voice.

I loved it! You get to hear the man's story in his own voice. Powerful... Inspiring... Awesome!!!

This lays out why the military men and women responded to the 911 attack. The energy and supreme sacrifice is very well presented in this book.

Home from hell,back to heaven

Good story, did not care for the reader,it seemed very flat,hard for me to stay into the story,

Great story...my hats off to Robert Lewis for sharing the world he experienced through the eyes of one of American's elite warfighters doing what the they do best...HUAAAA!

The storyline and overall context were amazing. Makes you appreciate everything you have, be thankful for who you have in your life. Makes you appreciate the men and women who are serving and are part of a greater cause, fighting for the freedom of this nation and thankful for all the sacrifices they have made. Informational, educational and very good read. I would suggest this book to anyone and everyone if you are not into war books or anything in this sort.

Thank you for sharing your experience.

As a veteran I believe all of our stories are relevant. The way this was written made it difficult to get truly involved in the narrative.

I listened to this on audiobook and read some of it. Highly recommend. Awesome story from a hero in many regards.