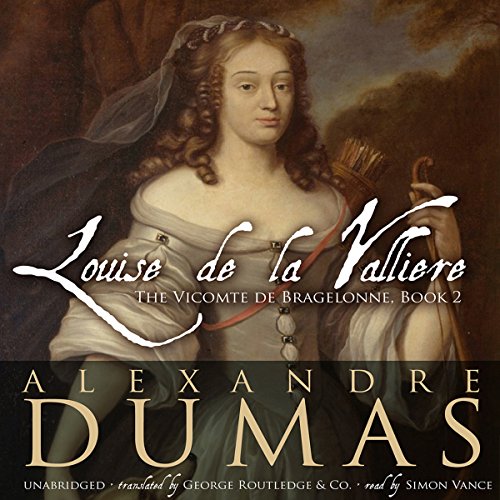 By: Alexandre Dumas
Narrated by: Simon Vance
Try for £0.00

As part of the d'Artagnan Romances following The Three Musketeers and Twenty Years After, and devoted in large part to romantic events at the court of France's King Louis XIV, Louise de La Valliere is the second part of Alexandre Dumas's 268 chapter novel The Vicomte de Bragelonne: Ten Years Later, which first appeared in serial form between 1847 and 1850. Filled with behind-the-scenes intrigue, the novel brings the aging Musketeers and d'Artagnan out of retirement to face an impending crisis within the royal court of France.
Public Domain (P)2009 Blackstone Audio, Inc.
Classics Historical Fiction
Show More Show Less

"One of the very best of the series, mixing amorous and political intrigue with an élan peculiar to Dumas...this quasi-historical series remains remarkably readable" ( The Irish Times, Dublin)

I have read all that books in the series and now go on to The Man in the Iron Mask to complete the story. I have enjoyed every minute of all . Simon Vance tells the story really well and have marked his performance higher than story and overall to stress my point. Again I have had a really good read/listen, just plain the Best of Entertainment.

Sadly, only one more book to go. Brilliant as always.

Have been listening to this series in correct sequence. Such a joy. Though I have listened to the last book some time ago, it makes more sense now and I will repeat The Man in the Iron Mask. Films can’t and don’t do justice.

Simon Vance’s narrations are excellent. Good effort at producing and repeating voices for different characters though personally I expected different for D’Tan and the two kind verse very similar. I expected King Charles II to sound more English though he spent time in France.

2nd best in the series.

loved it and defiantly the 2nd best in the series, some really touching moment's, dumas at his very best , funny in parts, a classic in my opinion.

The weakest of the series

A bit too much 'woe is me I'm in love' and not enough swashbuckling in this one!

A Soap Opera with Musketeers

This story seems quaint and very subtle by modern standards.

Large tracts are devoted to the minutiae of French royalty and the surrounding courtiers, where sometimes there is a very long and (impeccably narrated) winding road to reach a climax where one of several gallant knights squeezes one of several ladies-in-waiting hands or some other equally scandalous body part.

Not the best book in the series

I loved the performance by Simon Vance as with all his work. However, this installment is not up to the great level of Dumas' previous three books in the series. A romantic farce rather than a tragedy it just doesn't hold up. Can't wait to get back to his great writing with Man in the Iron Mask.

Please give us all of the Dumas that is available in audio format -- commission new recordings, if necessary. Louise de La Velliere is another fine prequel to The Man in the Iron Mask, even if you have already read that classic. Louise, Raoul, Athos, and many other characters are understood more easily when The Vicompte de Bragilonne, Louise de La Valliere, and The Man in the Iron Mask are taken in the proper order. No wonder Aramis wants to replace Louis on the throne with his twin brother!

This is the middle third of book 3 of the D’Artagnan series of which book 1 is the most famous (The Three Musketeers). Book 3 was so long that it has been divided into three books in modern times and even each of those thirds is as long as books 1 and 2. By now, only D’Artagnan is the only one who is still a musketeer, now at the top and the closest to the king. The other three musketeers have all gone their own way. All four musketeers appear in this book, but they are not the main focus. Athos only appears once in the beginning when he asks the King for his approval for his son Raoul to marry Louise, for whom this book is named. And, she becomes the center of the rest of the book, not that she is the focus, but that she becomes the axis for the stories of all the other different personalities in the court to spin around. The musketeers have already reestablished the monarchy in England in the first third of book 3, “The Vicomte de Bragelonne” and this book is as the throne of Louis XIV has become strong. His power is now without practical limit and his rule has become decadent with everyone trying to do their best to please him. Yet, the rumors are flying and his affairs with different mistresses are not helping his reputation with the people. As the middle third of the book, this volume serves as a bridge leading to the last third, which is also one of Dumas’ most well-known books, “The Man in the Iron Mask.” As a bridge nothing is completely resolved, but the narrative is engaging and keeps you interested. If you’ve read “The Man in the Iron Mask” before having read this book, you’re missing a lot of that story also.

This book is a very good continuation of the story. There is little of the musketeers but it sets up the finale very well.

low point of the series so far

I really am not interested this much in the love affairs of the French king...

Superbe narration ! Blah story. Good to know the history of this time. Looking forward to The Man in the Iron Mask!

Reading through the ongoing story of the 3 Musketeers is a grand adventure. This installment must be the birth of romance novels. Dumas, in his usual style, has not mastered the art of wrapping up a story. So I go on to the next installment, The Man in the Iron Mask, with full expectation of good entertainment

The story was frustrating. Marriage must not mean much in France. The only people I still have respect for is Raul and Athos and Porthos... I hope the conclusion is better.