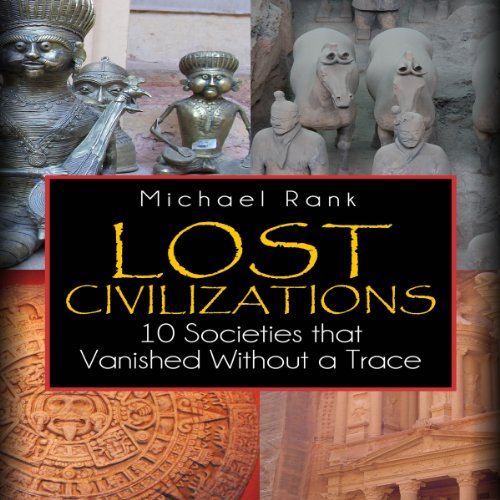 By: Michael Rank
Narrated by: Kevin Pierce
Try for £0.00

From the #1 bestselling author of History's Greatest Generals comes an exciting new book on the greatest societies in history that vanished without a trace, and why their disappearance still haunts us today.

Whether it is Plato's lost city of Atlantis, a technological advanced utopia that sank into the ocean "in a single day and night of misfortune"; the colony of Roanoke, whose early American settlers were swallowed up in the wild forest lands of the unexplored continent, or the Ancient American Explorers, who managed to arrive to the New World 2,000 years before Columbus, the disappearance of these societies is as cryptic as it is implausible.

This book will look at cultures of the 10 greatest lost civilizations in history. Some were millennia ahead their neighbors, such as the Indus Valley Civilization, which had better city planning in 3,000 B.C. than any European capital in the 18th century. Others left behind baffling mysteries, such as the Ancient Pueblo Peoples (formerly known as the Anasazi), whose cliff-dwelling houses were so inaccessible that every member of society would have to be an expert-level rock climber.

It will also at explanations as to how massive societies that lasted for centuries can disappear without a trace. Did the builders of the pyramids handy craftsmen whose method of transporting massive stones are still unexplainable simply disappear or were they part of an advanced alien race, as conspiracy theorists assert? Was the Kingdom of Aksum really the keeper of the Ark of the Covenant, and did this lead to their downfall?

Whatever the nature of their disappearance, these lost civilizations offer many lessons for us today - even the greatest of societies can disappear, and that includes us.

What listeners say about Lost Civilizations

Another Great Book from Michael Rank

Michael Rank has once again told the story in a clear concise manner. Well worth getting.

This was a very nice introduction to lost civilizations. If you are looking for a detailed history book, this is not the title for you. If, instead, you are looking for an introduction to the topic this is for you. It gives you a primer on lost civilizations throughout history, and enough detail so that if you wanted to know more you could go find it. The detail given is slightly more than you might find on Wikipedia, so for me it was worth the buy. (I do question the inclusion of Atlantis since no actual physical evidence of this "civilization" have ever been found.) The narrator was adequate - he had enough inflection in his voice to prevent this from turning into a classroom lecture. He was well-suited for the subject matter, though I am glad there was no need for multiple voices for him to deal with.

Would you listen to Lost Civilizations again? Why?

I would probably listen to Lost Civilizations again because I found several of the chapters quite interesting. Because I listened to it as an audiobook rather than read, I don't feel as though I retained what I learned quite as well.

What was one of the most memorable moments of Lost Civilizations?

Even though the information wasn't particularly new to me, I enjoyed the chapter on Atlantis. I also was fascinated with the chapter on the cliff dwellings in New Mexico.

This book isn't for someone looking for in depth information, it's more of an introduction to ten societies from history. There was quite a bit that I learned and I enjoy Michael Rank's "bite-size" history books.

intellectually grounded discussion of the issue

The facts that significantly advanced early civilizations seem to have disappeared and had been conceptually more advanced than we today believe possible, is explored rationally in scientific terms. he concludes that cultures don't disappear but rather fade away into another form..

informative but boring. this audio book is like reading through medical code for a couple hours

Overall I found the book enjoyable. It does a nice job giving basic overviews of the various civilizations including myths, historical writings & archeological findings. It is a great intro to anyone interested in learning humanities "lost history" without all the wacked out alien God's riding chariots.. (which sadly is the only "lost history" now found on the "history channel")