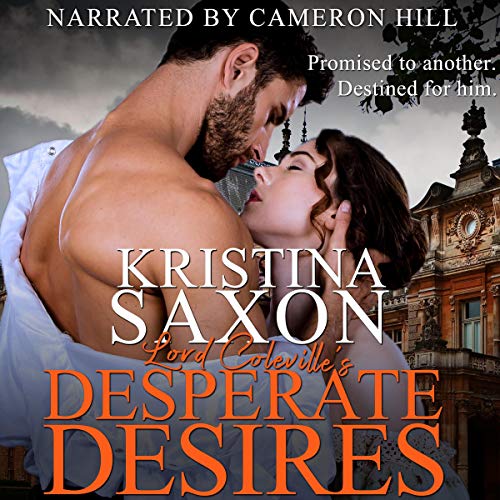 By: Kristina Saxon
Narrated by: Cameron Hill
Try for £0.00

Promised to another. Destined for him.

Upon Lord Eric Coleville’s return from the war, The Honorable Sarah Brighton catches his eye. He must have her at any cost, and while their desire is mutual, she is already promised to another - his younger brother. Honor is everything to Eric, but it pales when weighed against losing Sarah. He will use every tactic and strategy at his disposal to steal his brother’s intended bride and make her his instead.

This is a short, steamy, Regency romance. It features instalove, instalust, and a swoon-worthy hero intent on claiming his true love.

This was a pretty good book. For a short book, it continued on at a nice pace. Eric was determined to have Sarah, who was supposed to marry his brother Andrew. Andrew and Sarah were fond of each other but would never be truly in love. Eric took her virginity so she would be his for all time regardless of what anyone said. He was determined to marry her from the moment he saw her.

Cameron Hill did a good job with the narration. I received this free copy audiobook at my request and have voluntarily left this review.

By hook or by crook the charming devil gets his due . A very short steamy encounter reaps the rewards it was intended to reap. Enjoyable encounter. I voluntarily listened to a free copy of this and am giving an honest review. The narrator did a great job bringing it to life.