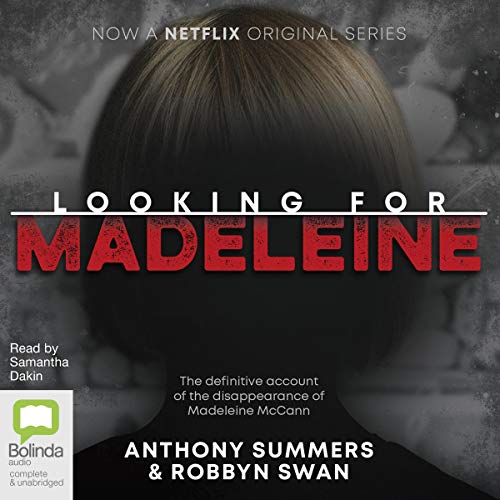 By: Anthony Summers,Robbyn Swan
Narrated by: Samantha Dakin
Try for £0.00

Looking for Madeleine is the not-to-be-missed account that the online haters tried to silence. Its award-winning authors, Anthony Summers and Robbyn Swan, feature in the Netflix series The Disappearance of Madeleine McCann.

Twelve years on, as Scotland Yard and Portuguese investigators continue their work, the Yard is reportedly focusing on a specific suspect. A senior officer told the authors: 'The case is solvable'.

"Delves beneath the hysterical headlines to tell the real story of this heart-breaking mystery." (Choice Magazine)

What listeners say about Looking for Madeleine

Like the majority of people I am open minded about what happened to Madeleine and yes everything points towards an abduction, however this book totally plays down the other potential scenarios. There may not be any concrete evidence that any foul play happened with the parents and/or friends, however a neutral approach would be to at least accept there are some discrepancies. Apart from Madeleine not being there what concrete evidence is there to 100% confirm she was abducted??
I appreciate the awful treatment the McCann's have been through via social media but is it really necessary for a book to essentially do the same back to the haters in naming and shaming them?? This again only adds fuel to the feeling that this book is only interested in one side of the story rather than being balanced.
My advice would be to give this book a miss and try another source for a more balanced view.

nothing new, but a good reminder of the events

I am very disappointed with this book. It has been written to back Madeleine McCann’s parents it would appear and to support the abduction theory so therefore has not considered other possibilities. What was the point of a book like this unless it considers every theory? I would not recommend wasting a credit on this very poor review of the events. Also shaming Brenda Leyland in this book who committed suicide is a poor show and very disrespectful.

The information shared within the words ought to be made more widely broadcast to every parent and guardian worldwide. Yes, they may frighten many. However, on the other hand, they will educate and put readers on their guard to ensure the safety of those youngsters in their charge.

I would love to meet with Kate & Gerry as well as one of the Metropolitan Police investigators to wish them well in their efforts to find Madeline and to bring any wrong doer to justice.

This book is amazing. It kept my full attention from the beginning all the way through the end. I would definitely recommend this book. The facts speak for themselves. Thank you to the authors for presenting me with the knowledge about the abduction.

This was pretty much ruined right off the bat by the author's fervent assurances that there's no reason to infer that any of the main characters had anything to do with the events described. So, what's the point of investing the time to listen?

I found this to be well researched and interesting. They lay out new evidence and many plausible explanations.

I was very upset with the lack of information. I had followed the story about Madeline, and had hoped the book would give more info. I had a lot of trouble getting through it. I wouldn't recommend it to others. Very boring. Cheree'