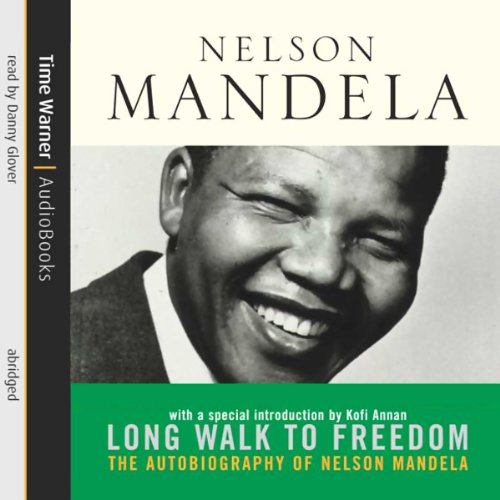 By: Nelson Mandela
Narrated by: Danny Glover
Try for £0.00

The riveting memoirs of the outstanding moral and political leader of our time, Long Walk to Freedom brilliantly re-creates the drama of the experiences that helped shape Nelson Mandela's destiny. Emotive, compelling, and uplifting, Long Walk to Freedom is the exhilarating story of an epic life; a story of hardship, resilience, and ultimate triumph told with the clarity and eloquence of a born leader.
©1994 Nelson Mandela (P)2004 Time Warner AudioBooks UK
Biographies Historical Politicians Freedom & Security
Show More Show Less

"Burns with the luminosity of faith in the invincible nature of human hope and dignity....Unforgettable" (Andre Brink)
"Enthralling....Mandela emulates the few great political leaders such as Lincoln and Gandhi, who go beyond mere consensus and move out ahead of their followers to break new ground." ( Sunday Times)

What listeners say about Long Walk to Freedom

Lacking warmth and depth of narration

Would you listen to Long Walk to Freedom again? Why?

. I would listen to this book again but not until it is read by a better voice sorry.

I have already listened to conversations with myself and found it a beautiful listen, I had hoped for the same warmth and to learn more about this great man but sadly the American accent really affected this books listening, I found myself switching off and at times becoming annoyed by the lack of beauty that can be heard when the African language is pronounced in a tongue capable of giving it the rolls and ripples it deserves

An amazing read from start to finish. I loved every chapter and each chapter was more interesting than the previous. What an amazing man ! He was a Saint 😇

This was the first title I purchased once I had subscribed to 'Audible'. The narration by Danny Glover (who's understanding, diction and pronunciation of the Xhosa language is exemplary), made for an entertaining, empathic and educational listen. I thoroughly enjoyed every minute and will return to the book time and again.

Narrator does not follow all the words in the book

What aspect of Danny Glover’s performance might you have changed?

I don't think it works having this book read with an American accent. Also the narration misses sentences from the book.

Low rating for the narrator - not the book itself

I haven't yet been able to get through this book - which has been a real disappointment to me. For some reason the narrator's voice to me is extremely irritating and grinds - not sure why - it just did. If you are thinking of purchasing this, please listen to a sample first to make sure you're ok with the narrator's voice. Such a shame because I'm so keen to read/listen to this!!

Danny Glover has no idea how to pronounce important Xhosa, Afrikaans or South African English words. Some names are so badly mangled I have no idea who he is referring to. And I live in South Africa and followed the events closely. This edition is a disgrace. There are many excellent South African voice artists who would have done an infinitely better job.

Apart from that, the book is interesting, albeit abridged. it tells an important story of and by a man whose impact on South African history and politics has been profound. If you can put up with the narrator you'll enjoy the story.

Shame about the narration, very off putting! Danny Glover made a good attempt pronouncing the names etc.. but it just sounds painful and unnatural, breaks the flow. Him trying to read stands out more than the content. Don't buy this audio book- doesn't do justice to the legend that is Nelson Mandela. better get paperback.

The audiobook contains a lot of facts, and not many interesting lessons, that one could learn from. After listening to all the audiobook I'm actually less interested in who was Mandela.

I feel humbled to have been able to read/listen this book knowing that Nelson Mandella himself wrote it.

I listened to this book as an audio book and was pleasantly surprised to hear the great man himself.

One of the truly great men of all time telling his story with details of how his own people were oppressed. The dignity with how he dealt with the whole overall situation and his personal struggle throughout it all.
A real inspiration of a man. I cannot recommend this book enough!!!!!

Inspiring, educational and most enjoyable. Highly recommended to anyone with even a slight interest in this man, his legacy or the resilience and capacity of the human spirit.

Amazing story let down by a poor narrator

The story is completely riveting and no fictional account could invent the drama and pathos of the events.

Unfortunately, Danny Glover was not up to the task. He could not pronounce the South African surnames and place names correctly which detracted from the narrative. Oddly, even some of the English names (eg. "Meedowlands" for Meadowlands) were incorrect.

There are hundreds of very accomplished African actors and voice artists who could have narrated the story with passion and authenticity. To hear Mandela's words spoken with an American accent is jarring but this would not be the first (or last time) that Hollywood has butchered a good story by casting an American in the lead role.

African accents are rich in nuance and actually quite easy to understand for any English speaker, its a great pity this book could not be narrated more authentically.

This production is an audio massacre. I'm sure Danny Glover was delighted to read the autobiography of such an admired man, but this production did Mr Mandela no favours. I can't vouch for the Xhosa pronunciations, but Glover butchers common SA English words such as "veld" (pronounced felt) and even Mandela's own name. It's man-DEH-lah.

This audiobook is a perfect example of how British and American disregard for accent and pronunciation leads to accusations of cultural imperialism. If Tom Sawyer was read by a Pakistani narrator, how many Americans would complain? There would be an outcry. So why not get a South African narrator to do a proper job? There are a number of SA voices with the deep vocal quality of Glover, without the glaring inability to pronounce names correctly.

I'm sure I will eventually get used to the butchering of names and words, but it is all so unnecessary. The author deserves better respect than this disaster. The producer owes him an apology, but this is unlikely to happen.

Would you consider the audio edition of Long Walk to Freedom to be better than the print version?

Had this version been read by a person who is fluent in South African indigenous languages in general and could read isiXhosa in particular it would have received a five star rating from me. It needs to be redone, as this inspiring sometimes sad, and mostly beautiful story has been hard done by the readers inability to pronounce South African words such as Veld or even isiXhosa, how was he expected to even utter the words such as ndiyindonda (I am a man) properly, though Bra-Danny Glover is a good english reader. Audible has pulled a fast one on me, I guess, if I could, I would return this version of the book to sender....unfortunately I am not sure how I could do that digitally.

Nelson Mandela is an absolute icon of the 20th/21th century, if not the most respected and idealised human being and role model.

As a south african, I know that the pronounciation of the afrikaans and african words is hideous!
Danny Glover as a narrator was a very bad choice. There are many talented South africans that could have given the autobiography of the man who lead south africa out of the era of apartheid a more authentic and enjoyable experience.

I stopped listening to the audiobook and bought the book so I could read it for myself!!!

I rate the book as 5 stars as I would not want the dissapointing choice of narrator to take away from what a brilliant read this is and to be able to experience the trials and tribulations of our Madiba!!

Would you try another book from Nelson Mandela and/or Danny Glover?

I was particularly disappointed with Danny Glover's voice and hence I didn't enjoy the book as much as possible.

There was not enough detail to really grab my attention, and in addition to this I found there was a never ending list of people's names and associations that in the end became somewhat meaningless.

Was Long Walk to Freedom worth the listening time?

I expected a lot more from this book. The only parts that really grabbed me were the freedom songs that were occasionally inserted into the story and the actual speech by Nelson Mandela towards the end of the book.

In spiring story in spite of a terrible narrator

The story is truly inspiring. Unfortunatley the Xhosa and Afrikaans sentences and words are horribly mutilated by the pronounciation of the narrator, who attempts fake Afrikaans and Xhosa accents but ends up coming ccross with something that is completely incomprehensible to people who understand the languages. If it really unfortunate that someone who speaks both Xhosa and Afrikaans could not be found to read this. Please find a better rendition of this and replace this truly terrible narration

Difficult to understand the narrator

Danny Glover does not have a clear voice to be a narrator, at times listening became uncomfortable, words were mumbled and swallowed and the attempt to pronounce indigenous names was very poor.
I think Nelson Mandela deserves better than this.
I wish I could get a refund for this purchase because I did not get the full benefit of the book. I will have to read it myself.

The story was fantastic and thank you for abridging. As a South African it was a bit challenging listening to an American butcher South African words, phrases and names. But I highly recommend the audiobook nonetheless.

Interesting to relive history and hearing it from the other side, especially as Madiba is one of the greats (and you can understand why)

The narration and butchering of the language was very unnecessary and uncomfortable to hear. I think the publishing house could have recruited someone with better context of the language and culture. As a South African who loves audio books, this version was incredibly distateful and in some cases i struggled to make out what exactly the narrator was trying to say when they called Xhosa names as I knew that's not how we pronounce them and as a result it lost meaning as I didn't have the hard copy infront of me to double check.