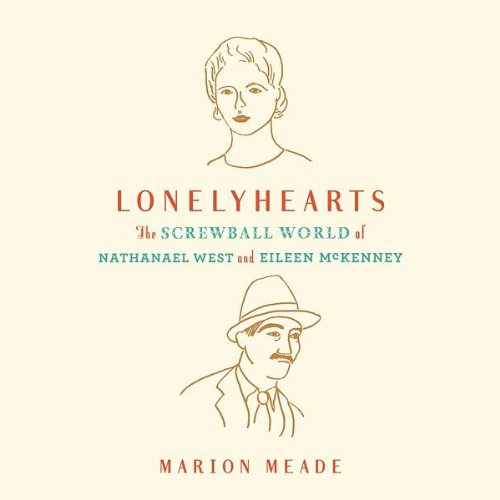 By: Marion Meade
Narrated by: Elisabeth Rodgers
Try for £0.00

Nathaniel West: novelist, screenwriter, playwright, devoted outdoorsman, was one of the most gifted and original writers of his generation, a comic artist whose insight into the brutalities of modern life proved prophetic. He is famous for two masterpieces: Miss Lonelyhearts (1933) and The Day of the Locust (1939). Seventy years later, The Day of the Locust remains the most penetrating novel ever written about Hollywood.

Eileen McKenney: accidental muse, literary heroine was the inspiration for her sister Ruth's humorous stories, My Sister Eileen, which led to stage, film, and television adaptations, including Leonard Bernstein s 1953 musical Wonderful Town. She grew up in Cleveland and moved to Manhattan at 21 in search of romance and adventure. She and her sister lived in a basement apartment in the Village with a street-level window into which men frequently peered. Husband and wife were intimate with F. Scott Fitzgerald, Dorothy Parker, Katharine White, S.J. Perelman, Bennett Cerf, and many of the literary, theatrical, and movie notables of their era.

With Lonelyhearts, biographer Marion Meade, whose Bobbed Hair and Bathtub Gin earned accolades from the Washington Post Book World ("Wonderful") to the San Francisco Chronicle ("Like looking at a photo album while listening to a witty insider reminisce about the images"), restores West and McKenney to their rightful places in the rich cultural tapestry of interwar America.

“Ms. Meade deftly choreographs these boldface names as they rush to and fro between Hollywood and New York, those antipodes of 1930s writers.” (Molly Haskell, The Wall Street Journal)

What listeners say about Lonelyhearts