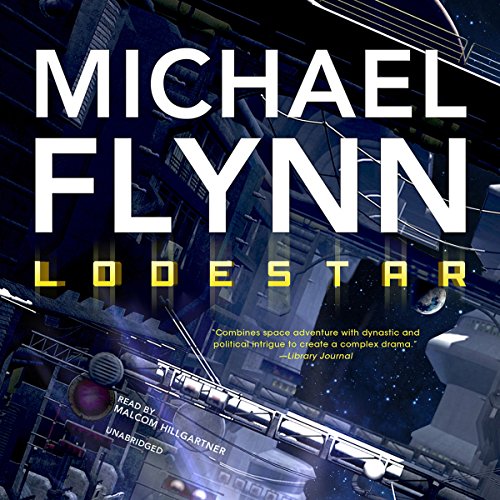 By: Michael Flynn
Narrated by: Malcom Hillgartner
Try for £0.00

In the early years of the 21st century, humanity has progressed into space, having established a permanent presence with Earth-orbiting Leo Station. Science and commerce in space are booming, and humanity’s future looks bright. But one man’s desire for vindication and revenge could end it all.

Lodestar chronicles the complex political, personal, and scientific conflicts on Earth and in orbit—conflicts that must be resolved if humanity is to claim its destiny among the stars.

"Flynn’s fans will enjoy this well-crafted outing and can rest assured that the story's big questions (Who is lobbing these rocks at Earth? And why?) leave plenty of room for a sequel." ( Publishers Weekly)
"Flynn’s multivolume saga of near-future global peril combines space adventure with dynastic and political intrigue to create a complex drama with a large cast of characters and a too-plausible premise. Along with its precursors, Rogue Star and Firestar, this volume belongs in most SF collections." ( Library Journal)
"Flynn’s is a good series." ( Booklist)

What listeners say about Lodestar

The narrator was great, the story kinda boring

I loved the first book in this series. The story was compelling, and it held my interest. The author painted pictures with words, and the characters were deep and sympathetic. In this edition, it was all characters and no story. I found myself daydreaming and losing my place. Read the first one and enjoy it. This one is not worth the time

it's a good book, but it's really wonky in how it shows the Internet is used

I Was Left Panting For More

Would you listen to Lodestar again? Why?

I probably would listen to it again as I was intrigued by many of the descriptions of scientific developments, which I would want to review in the light of current advances. The plot was quite intricate and I'm sure I would pick up on elements I had missed first time around.

Would you be willing to try another book from Michael Flynn? Why or why not?

I certainly would and I have.

Which character – as performed by Malcom Hillgartner – was your favorite?

My Favorite character was still Mariesa Van Huyten even though she didn't feature that strongly since the story was more about the next generation.

I enjoy lengthy books that I can spread over a number of days. However, in the case of Lodestar I found myself listening when I really should have been doing other things, so I suppose I would have listened to it all in one sitting if I could have done so.

Although Lodestar is the final book in a trilogy, I think the story line begs a fourth installment.