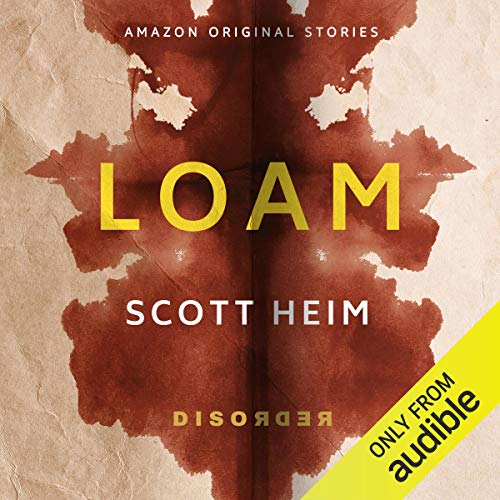 By: Scott Heim
Narrated by: Jeff Cummings
Try for £0.00

When three siblings return to their hometown for their estranged father’s funeral, burying the ghosts of the past proves to be impossible in this chilling story by the author of Mysterious Skin.

Forty years ago, triplets Miriam, Louise, and Edward were swept up in a case of rural mass hysteria. Coerced into fabricating unspeakable lies about their first-grade teacher and her adult son, they were complicit in destroying two lives. Ever since, they have believed they are being followed by a presence still seeking retribution for their childhood sins. Unless their guilty consciences are conjuring as many monsters as their innocent minds once did.

Loam is part of Disorder, a collection of six short stories of living nightmares, chilling visions, and uncanny imagination that explore a world losing its balance in terrifying ways. Each piece can be read or listened to in a single disorienting sitting.

What listeners say about Loam

Not for Animal Lovers! Very twisted

This is NOT for people who love animals. I like Dark mystery thrillers but this was sick and twisted. I never turn off a book, but I couldn't listen anymore. There should be some kind of disclaimer.

I tried to get into this and enjoy it. I listened to the end but at the end I felt like it was just a waste of time. It just was a pointless story with no real answers or ending.

The summary is hyperbole at its best.

A complete waste of 90 minutes. I only continued listening because I was otherwise occupied and figured I would see it through. Perhaps the reader deserves more than 2 stars but he definitely lent nothing to the redeem the story.

The story... Boring and anything but mysterious, eerie or thought provoking.

Sadly, I believe I'll pass on the related titles.

left me wondering what really happened when they were six. the mind is a mysterious place.

agree with the other fans

This topic of unreliable memory is a natural for this author. The short story is a perfect length for me, but I would also love to see if he does more with these characters or a similar situation in a full-length novel.

A creepy, short read. I read this right before going to bed and I know I’m going to regret it.

I expected more but was left disappointed

OVERALL — 2½ stars
Hmmm. What did I get out of listening to "Loam"?
Well, I learned what the word "loam" means. So there's that.

PERFORMANCE — 3 stars (I listened at speed 1.4)
There was nothing outstanding about the performance that would put it in the great or excellent category. Jeff Cummings performance didn't detract—of course, there wasn't really anything to detract from. If anything, he helped me trudge through to the end, which likely wouldn't have happened based on the story itself (which probably had to meet a minimum length requirement because it could have been told in half the pages). For that reason the narration merits more stars than the story does.

STORY — 2 stars
Besides the fact (as stated above) that I listened to the story rather than read it myself, the reason I stuck with the story to the very end was the hope that there would be a payoff for the 1.25 hour (that seemed hours) I spent on it.
There was no payoff.
Thus I cannot give more than 2 stars.
(Even an average story should not leave you disappointed, as Scott Heim left me with "Loam").
I certainly can't rate "Loam" 1 star because the writing itself was good. Even literary. But what good is literary writing if there is no reason for the quality of the work? The whole time I was, like, "Okay, I get it, so why are you telling me all this." The answer turned out, apparently, to be "Just to say it." There seemed to be no reason at all (other than to tell readers that there are ignorant people in the world—but surely we don't need 37 pages to make that point).
As for the ending – and, again, the only reason I stuck with "Loam" to the bitter end was the hope that there would be some sort of big reveal – fell just as flat as all that had come before.
I should, at least, have seen THAT coming since there had been no real development as the "story" had been told up to that point.

Finally, if you DO decide to get this book and read/listen to it, and you are as disappointed as I was, don't say I didn't warn you.

If my review here has been helpful to you, please click "Helpful" below.

The Other Victims of Satanic Panic

My only quibble with the Satanic Panic of this story is that it would have occurred in the early-to-mid 1970s, when the actual railroading occurred fifteen years later.

But the story is solid. If narrator Jeff Cummings can't quite do women's voices, he does keep each character distinct. Much more importantly, he carries the emotional weight of each and every word, and that's what kept me on the edge of my seat for an hour and fifteen minutes.

If the resolution isn't pat, if there are loose threads remaining, it is apt for the story.

Great story/plot. Extremely detailed in every way HOWEVER the ending is a little frustrating.

A compelling,disturbingly spooky take well written from the points of view of triplets, who at age 6 are coerced and manipulated by their parents as well as law enforcement to tell horrific lies about their childhood.