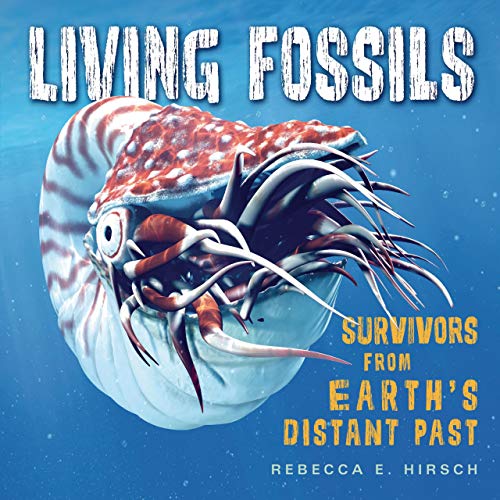 In the history of life on this planet, 99.9 percent of all species have gone extinct. But a few have survived almost unchanged. Author Rebecca E. Hirsch introduces listeners to six living fossils, including the chambered nautilus, the horseshoe crab with its sticky blue blood, and venomous platypuses that sting, as well as a comprehensive explanation of evolution and extinction for listeners who may not be familiar with the terms yet.

Listeners will also discover a a spectacular timeline of the history of animal life on Earth. Dive into the stories of these incredible animals, and find out how they help scientists piece together evolutionary history.

"Over the millennia many creatures have come and gone, but six unusual animals have survived and changed very little. From numerous possibilities, Hirsch has chosen six examples of animals that could be called 'living fossils,' although she makes clear that, like other life on Earth, they've evolved over time. In choosing, she also looked for animals with uncommon traits, highlighted in her descriptions. Her selections - horseshoe crabs from the Atlantic coast, chambered nautilus from the Indian and Pacific oceans, West African lungfish, tuatara from New Zealand, duck-billed platypus from Australia, and selenodon from Hispaniola - are a combination of familiar and surprising.... An introductory chapter introduces the theories of evolution and natural selection and discusses the way a living fossil, such as the velvet worm, still so like Aysheaia from the Cambrian era, actually has evolved. It includes a timeline. A final spread reminds readers that living fossils, who've survived major extinctions, are threatened again by a human-caused sixth." (Kirkus Reviews)

"Life on Earth has existed for nearly 3.5 billion years, but 99.9 percent of the species that have ever lived have gone extinct. Six of these living fossils are described.... These living fossils include horseshoe crabs, which climb ashore from their deep-sea habitat to lay thousands of eggs from Florida to Maine; the West African lungfish, which has a dual system of gills and lungs; and the tuatara lizard of New Zealand, which can slow its heart to seven beats an hour and live to at least 100 years. A time line details the history of life on Earth." (School Library Journal)

"Not satisfied with finding animals that are only similar to certain fossils, Hirsch limits her discussion to creatures that closely resemble their fossilized relatives, display some uncommon traits, and are nearly the last of their kind. After a brief history of animal life on Earth and a helpful explanation of natural selection, chapters are devoted to six species: the horseshoe crab, chambered nautilus, lungfish, tuatara, platypus, and solenodon. The covered topics vary widely, based on what Hirsch finds remarkable about the animals. For instance, though the horseshoe crab was nearly driven to extinction by the use of its blood to alert researchers to the presence of bacteria, the production of a chemically similar substance in the 1980s saved the species (and the migrating shorebirds dependent on its eggs). Hirsch organizes the facts logically, presents them clearly, and shares her fascination with each of the varied animals described." (Booklist)

What listeners say about Living Fossils